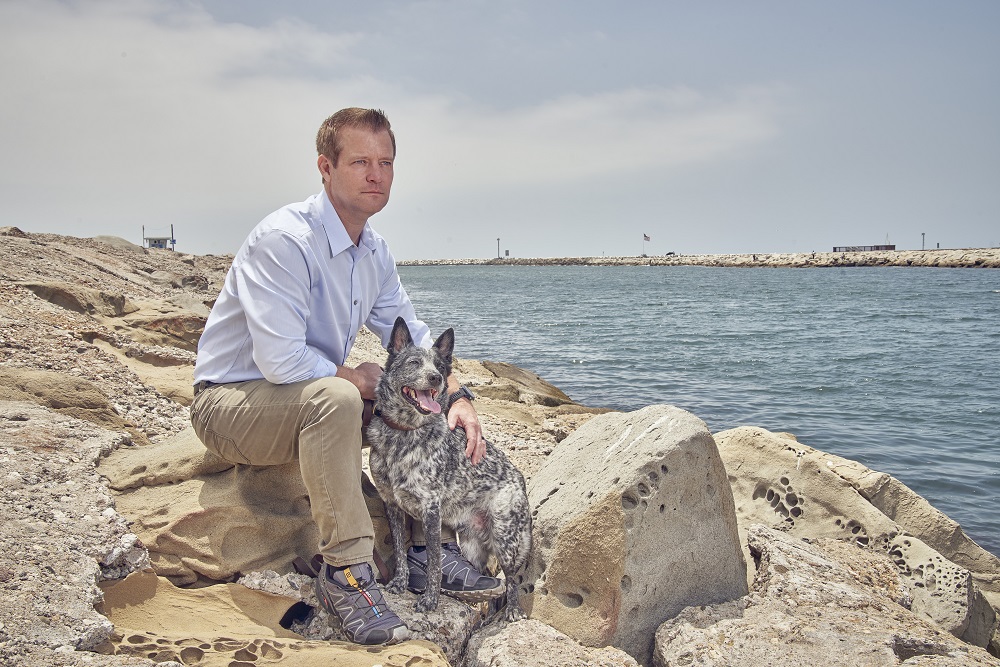 One of the biggest pet peeves that I have is being outside and seeing someone’s dog walking them. This pet parent is trying to convince me that “it’s okay” that they  “got” the dog. Meanwhile, the dog looks like I am either the first meal he has seen in a month of Sundays or the first friend that he will ever have a chance to play with. Either way, I’m going to cross the street. Because what WON’T happen is I find out that this person DOES NOT “have” the dog.

Let’s get something clear; I am a proud dog parent (I never thought I would categorize myself as more than an owner). My dog, Myles, is a Miniature Schnauzer and was the runt of the litter. While I have always had large breed dogs (and was strongly considering for a Great Dane), Myles’ size worked out for my New York apartment life and was even better for travel. I was determined not to have one of those “ankle biter” dogs that bark at house flies and go crazy whenever they want. Myles knows that if I snap my fingers, his attention is to turn to me and away from whatever else he is doing. I had to train myself in training a new puppy. That’s where we would like to introduce you to Jeff Franklin.

Jeff Franklin is seen as one of the world’s leading dog trainers after training over 10,000 pet dogs. Jeff has dedicated over 22 years to developing training techniques for police dogs, including tactical obedience, drug and explosive detection, tracking, personal protection, and domestic pet obedience. As a canine expert, Jeff has trained thousands of dogs of nearly all breeds, including pets for civilian life.

Jeff Franklin‘s incredible career has been profiled in the new book Franklin: The Man Behind the United States Commando Dogs, which chronicles his story of building the first-of-its-kind dog program for a “top tier” Task Force within the preeminent branch of the United States Military. Jeff‘s dog-training skills are repeatedly put to the test as he single-handedly turns men and dogs into the world’s most formidable K-9 combat teams. With no template to guide him, Jeff creates the canine selection criteria and the necessary training protocol to meet the high-octane demands of the covert Task Force.  Through Jeff‘s story, you will follow “operators” and their canine warriors on fiercely dangerous, secretive missions deep inside Middle Eastern battlegrounds. With his larger-than-life ambition, Jeff also finds himself in the hostile jungles of South America furnishing trained dogs to a national police force in the war against a powerful South American terrorist organization

SUAVV: What inspired you to start Cobra Canine, and what’s your vision for the business?

Jeff: As a young teenager, I had the drive and passion for training dogs.  Little did I know that you could make a living doing it.  Back then, people did not treat dogs as part of the family as they do now. I was inspired to start Cobra Canine, with Cobra, my first imported working dog.  His name comes from the Marine Corps helicopter “Cobra,” which as a very young Marine, I really appreciated them saving my company’s rear end several times in Desert Storm.  As time passed and my experience with training grew from pet dogs to sports dogs to police dogs and military special operations dogs, so did the need for trainers in all areas. Although I originally wanted to play pro-baseball, after suffering an injury, I transferred my energy and drive towards dog training. My vision for the future is to spread our training style, to educate dog trainers and owners alike, and to ultimately better the relationship between Man and Dog.  One way to possibly accomplish this would be through franchising. 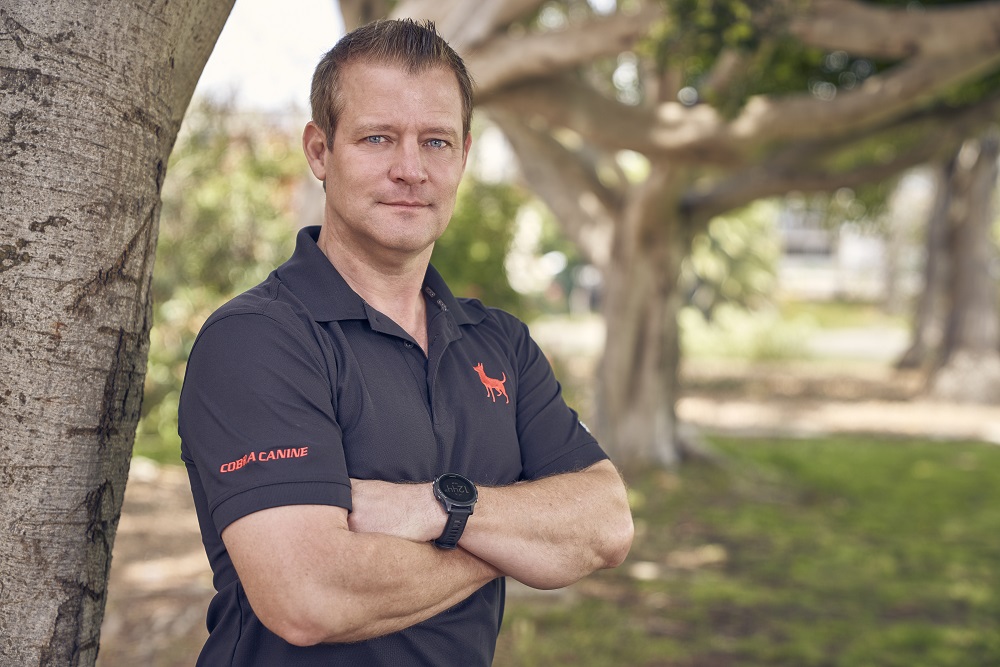 SUAVV: Tell us a little about the book FRANKLIN, which is based on your life. How do you know Matthew Duffy and are the two of you working on any other projects together?

Jeff: FRANKLIN is a broad snapshot of my life and career with dogs, dating back to my teenage years.  It has some fascinating and intense chapters that tell different stories along the way.  To be honest, it’s a bit weird for me to read.  I often think,  “Did I really do this or that? …Not so smart!”  Very early in my career, Mr. Duffy became an instructor for my protection dog training, which leads to a lifetime of mentorship and brotherhood.  Many authors have offered to write about my life; however, Mr. Duffy was the only one I could trust with some of the stories and sensitivities surrounding them.  Together, Mr. Duffy and I have at least one new book, a bomb dog training program, and training seminars and videos in the works.

SUAVV: How would you begin to train a dog that has been to several “Obedience Schools,” but still has no manners?

Jeff: I start with a simple evaluation of the dog’s demeanor and trainability.   Further, I listen to the owners to find out how they have been taught to deal with poor manners from their dog.  A dog’s past training does not affect our relationship.  I only need the previous details to help the humans.  Manners are the most improperly trained behaviors that I have dealt with for over 20 years.

SUAVV: What are some expert tips to help fix common complaints – Jumping, pulling on leash, barking, begging for food?

Jeff: We do not need commands to extinguish unwanted behaviors. People and “trainers” are habitually using commands to “stop” unwanted behaviors.  In fact, in using these commands–which are not likely very proficient—, people are just avoiding the problems. If training is kept black and white, then unwanted behaviors go away quickly.  Dogs thrive off of clear and precise communication and rules.  This is not to say that there is not also a time and a place for positive motivation, praise, love, treats, etc.  The more clear we are, the better and happier our pets will be.

SUAVV: What is the best way to introduce your partner/partner’s pet to your dog(s)?

Jeff: This is always a very interesting question as there are so many factors that play into this, including the dog’s breed, personality, sex, age, and the owner’s behavior. However, I recommend for dogs to meet on leashes on neutral turf with calm owners who are prepared if the dogs get out of hand. Remember, with all dogs, there will be a pack, and someone must be in charge…I prefer it be the humans!

SUAVV: How do you housebreak a stubborn dog?

Jeff: The majority of the housebreaking issues I deal with are usually due to the owner’s lack of routine and understanding.  I am a firm believer in proper crate training, set routines, and clear rules.  Never do we use negative reinforcement (i.e., spanking, yelling, rubbing noses in “it,” etc.).  It makes little sense to punish a dog–especially a young pup–for relieving itself, which is natural and physiologically necessary. On the other hand,  correcting a dog for unwanted behavior, such as jumping makes perfect sense as the dog does not have to do this.

As we always urge, before you buy or adopt a dog, make a list of traits that you want your dog to have, responsibilities that you are willing to take on and those that you are not (especially in the grooming area), think of size, sex, breed, and compatibility. Once you answer those questions, start researching breeds, met people who have those breeds of dogs, and make a wise decision. Dogs are a HUGE responsibility and often aren’t realized until they’re on their way to the humane society. So let’s make smart choices about becoming pet parents.