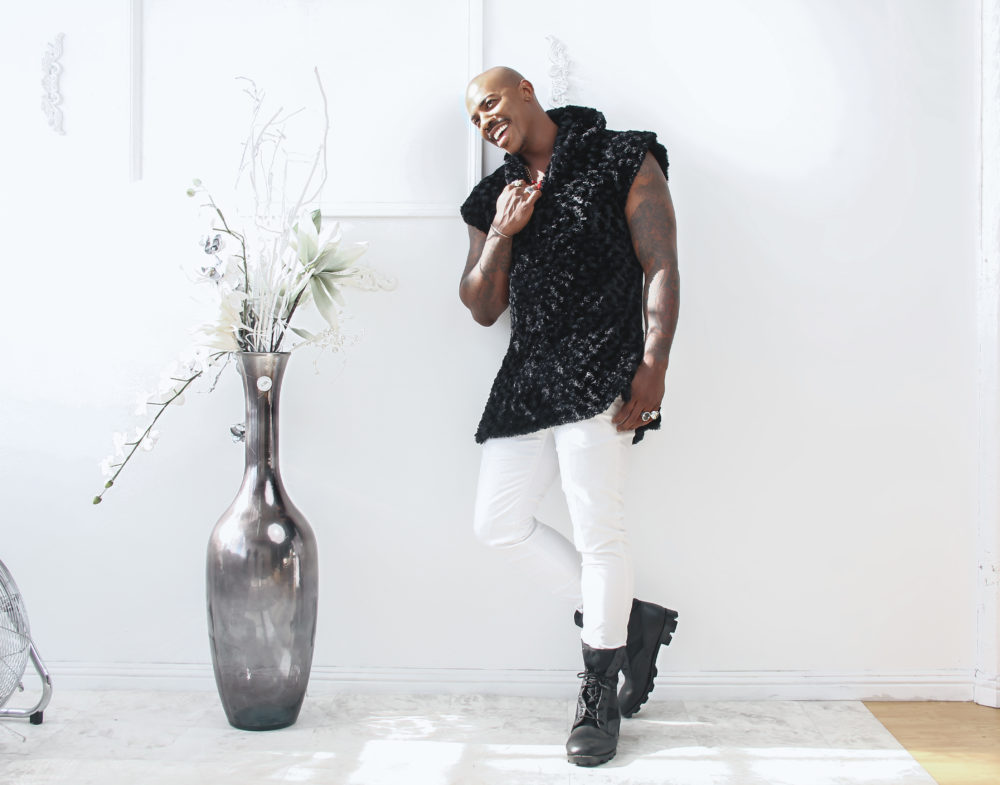 At the age of 15, Mehcad Brooks knew he wanted to be an actor. While watching Eddie Murphy, he realized that he wanted to entertain people. He wanted to make them laugh, think, cry, and begin conversations. Starting out as an underwear model for Calvin Klein, the 6’4″ 200-pound artist wanted to be more than just something to look at, more than a human mannequin. Mehcad wanted to give the world his personality. He wanted to use his gift.

SUAVV: You had Ivy League college offers and scholarship opportunities that you turned down to act. How did you know this was what you wanted and how do you feel USC changed your life.?

Mehcad: I knew around 18 years old that no matter what my choice was I had to be happy or upset with myself about that choice and the idea of entertaining people made me happy. USC Film School exposed me to films I would have never seen, stories I never would have heard and some of the films that have inspired me the most were homework assignments at USC.

Making his mark in tinsel town under a few roles such as Matthew Applewhite in the second season of ABC’s series Desperate Housewives, Jerome in The Game, Terrance “TK” King in the USA series Necessary Roughness , and as James Olsen on Supergirl, the role that many were introduced to Mehcad Brooks was Eggs in the hit HBO series True Blood.

Mehcad was easy on the eyes and his character development was growing with each role. But he wanted more. His personal life would be under the media microscope, his words would be listened to, his stance will impact any current or future job opportunities. It’s a game that many actors do not understand about Hollywood. Mehcad was prepared for it. We sat with Mehcad after his cover photoshoot and asked him some of the questions that were on our mind.

SUAVV: Tell us about The Tyler Perry film Nobody’s Fool which you were able to work on last year. How did this come about? And what was that experience like?

Mehcad: Tyler Perry called me up and said “I have a role in a film for you” and he asked if I could do him a favor and come play with them down in Atlanta. After I read the script I realized I wasn’t doing him any favors, I am very grateful because he gave me the opportunity to explore a part of my talent that I don’t often get to, my comedic side. Which brought me back to the reason I started in entertainment in the first place. And it’s always an honor to be amongst the greats. I could not be more grateful. I grew up watching Whoopi Goldberg and just to be in the same conversations as this legend is an indescribable honor.

SUAVV: You went to Africa and contracted a parasite. The parasite starts to take hold of your body and you end up in a hospital bed with IV’s and medication, then you have an allergic reaction to the medication that is supposed to fight the parasite. What happens next?

Mehcad: May 20, 2009, I died. I passed away. I crossed over to the other side, I saw all the things that people talk about, the light, waiting through a field of thick darkness yet knowing you’re in a loving harmonious oneness with the universe. I’ve seen it, I’ve felt it. I’ve tasted it, I understand what it means to disassociate yourself from who’ve you’ve always thought you were and the body you thought was yours. And I guarantee you at the end of this beautiful journey you are going to ask yourself the same question that I asked myself. Did I do what I agreed to do before I was born? Or did I just somehow allow my life to happen to me? The answer to that question for me was music.

No bullshit, 2 years later to the date, May 20, 2011, I got hit by a car head-on. She was going 65 miles per hour, I was stopped at a stoplight. Next thing I know I was in a coma and I had a very similar experience and after I got out of that hospital I was ready to fulfill my agreement but it took a long time to heal.

That following year, May 20, 2012, I met a holy man who opened my eyes to a connection that these experiences kept reminding me of. He showed me a way to connect to that voice of oneness without having a traumatic experience invoke it. The next day I began my music career and I never looked back, so what you hear in my debut album “MAY20th” is me fulfilling an agreement before I was born but with the benefit, the pain and the passion that comes with overcoming very unique and traumatic experiences in life.

My album called “May 20TH” really tells my story and I’m very happy that I was brave enough to put that out there in the world. It touches on some of the weakest moments of my life and I’m grateful to be able to share this with the world from such a position of strength and positivity.

SUAVV: Your activism has been a large part of what we have seen from you recently. You’ve stood up for reproductive rights, marriage equality, and most recently sexism (which we will touch on in a moment). What do you say to the people who say “What about the Black agenda”? you recently shared a screen with a friend of SUAVV, Omari Hardwick. Did you two talk activism and what could be done for the Black community?

Mehcad: Part of being a black male in today’s society is understanding that you don’t have to discuss what it is to be a black male in today’s society. Everybody who is a black male already understands what it’s like to be a black male. We have it much better than our ancestors ever did and hopefully much worse than children. Although we have to be very careful about homogenizing the experience and the concept of blackness. While Omari’s and my experience in America I’m sure is very similar in some ways it is undoubtedly different in many ways.

SUAVV: You grew up in a house with a lawyer and an editorial writer. and you’re very heavy in the political realm. Even with campaigning in the past with Former President Barack Obama and Senator and Presidential hopeful Bernie Sanders. What drives you?

Mehcad: Dinner at my house was like the Senate floor or an unruly general election debate. Growing up for me was debating political issues over homemade roasted chicken. My idea of summer vacation was my parents dragging me and my brothers to political conventions, town hall meetings and tagging along in various forms of community organizing all across the country and frankly, it wasn’t kicking and screaming, we actually liked it. I watched my parents fight for marginalized communities before I even knew what marginalized communities were.

I watched my parents win and lose battles against the system that had predetermined their value, they often beat that system but sometimes they did not and it made me realize at a very early age that things in America need to be fair. That’s all anybody’s asking for, is a fair chance to reach their full potential. I think the reason that I am more interested in politics than I am in sports like most men, is because politics is the only game where the consequences truly matter, so I’m competitive about that.

I also campaigned for Barack Obama in 2008 and 2012, damn near moved to Philly. I spent the entire summer registering voters in Philadelphia and I carried that on into the future giving a speech for Bernie in Wisconsin, or as I like to call him “Uncle Bern-Bern”.

SUAVV: You spoke recently about realizing that you were a bit sexist before filming Supergirl. Though you are seen publicly as more of a feminist sympathizer. How are you maneuvering to change that?

Mehcad: All men who are raised in a patriarchal society are sexist whether you support gender inequality or are a feminist you have a responsibility to take a good look at all of the ideas that you have about gender. There were agreements about gender defined by a power structure before any of us on this planet got here. If you blindly accept these without question then it is likely that you are unwittingly harboring the subconscious bias that our country has for women.

SUAVV: You actually put out a single recently along these lines entitled OCEANS. How did this come about?

Mehcad: “’Oceans’ is about female empowerment and female independence, free of the opinions of men and however he may feel about how & what she uses her attributes for. I think the world that we live in right now is extremely shallow however is it truly my place to judge a woman who’s able to exploit that shallow culture for what she wants?”

SAUV: From our understanding, there are some business ventures that you have also taken on.

Mehcad: I have invested in Tocaya Organica, which are modern organic Mexican restaurants. I’m also a founding father of the company, Onnit Labs, which is a human optimization company based in Austin and I own a record label called Our Movement Records.

Currently, living his life like it’s golden and pushing the 40-year-old mark, Mehcad has also decided to dabble a bit in the comedy realm. Using his voice for change and his platforms to encourage, he’s a down to earth guy who may chat it up with you a bit if you run into him in public. (Just try not to be too much and actually have something to talk about). All in all, we like the guy. We look forward to his growth and to his impact on culture and entertainment.