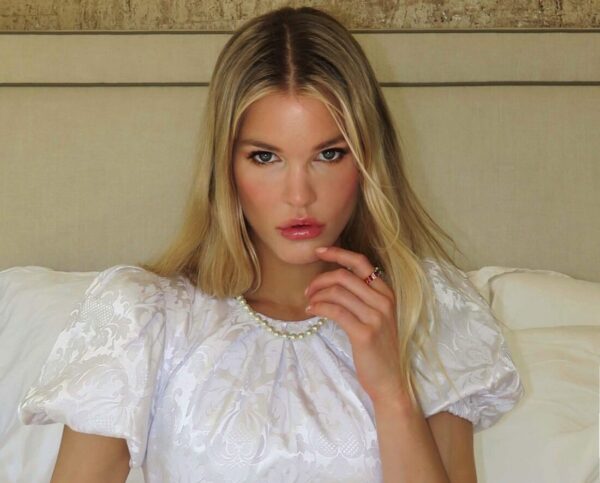 Joy Corrigan is an up and coming actress, clothing designer, and model. She has appeared in two Hollywood films alongside longtime Hollywood heavyweights Bruce Willis and Arnold Schwartzenegger and has many big projects to look forward to in the future. Joy is as passionate about art and the environment as she is beautiful, and her creativity shines through as the lead designer for her streetwear brand “Naked Species”. This multifaceted artist has a lot to offer the world and doesn’t plan on stopping any time soon.

You’re from a small town outside of Raleigh, North Carolina where you grew up with a pretty big family with a lot of siblings. How do you think growing up in that small town environment led you into modeling and acting?

I grew up in a small town called Creedmoor with six brothers and three sisters, and we grew up on a farm. We actually grew up pretty poor but at the time I didn’t realize that we were poor because we were homeschooled. My parents always made sure we had food on the table, whether it was powdered milk or textured vegetable protein, which is horrible tasting. *laughs* We were pretty poor, but I always wanted to get out of that and I knew I wanted to do something more with my life. I have always strived and worked so hard to get where I am. I have the huge support of my family and all my siblings and my parents, who are still together. It’s been a really hard journey but with the support of my family, it has been a lot easier.

Growing up, is there a specific memory of acting as a kid or putting on shows for your family? With such a large family I’m sure you always had an audience.

We were such hams as kids! We would always be acting together. I have some old recordings of us doing scenes in our living room where we would get all of the siblings involved. Even my dad would get into it too! We would just create scenes all the time and act out. It was just so fun. I think that really was the first time that I noticed “Hey, this is something that I really enjoy!” I never thought that I could do it for a career, but as time went on and I worked really hard I’ve made that dream become a reality.

As a kid, who inspired you the most as an actor?

I have always loved Will Ferrell. He is so funny in every single movie that he does! His improv skills are impeccable. If you watch some of the outtakes from his movies, each scene is different and he improvs so many of his lines. I just think that takes so much talent. I strive to be able to be that funny and be that spontaneous with each scene. I really look up to him. Anchorman is one of my favorites. I pretty much know every line from that movie!

What was it like to work with Bruce Willis and Arnold Schwarzenegger, who are much more serious actors than Will Ferrell? Is it intimidating to work on a set with such big Hollywood stars?

Yes, for sure, but I’m here for a reason. I have to remind myself that I must have some talent to be on set with such amazing actors. The way that Bruce Willis gets to set, delivers his lines with such confidence, and then he’s in and out like such a pro. He doesn’t do that many takes from what I saw, compared to what I would say most actors would have to do. He’s just such a pro. He has it down.

What would you say is the biggest lesson you learned on set?

There were a few things I learned when I first started acting. One thing is that I didn’t realize how long it took to make one scene. They have to shoot it from all different angles so one scene could take all day. They need to reshoot it over and over again, so you’re doing the same thing with different camera angles. That to me is so much different than modeling which is what I started in. Another huge difference is that you’re not supposed to look in the camera! I was so used to the photographer saying, “Alright, eyes here, look into the camera.” You’re supposed to pretend that the camera is not even there which makes it more fun. You can’t really worry about what you look like. You don’t really have feedback in the moment, but it is really cool to just let go and be in the moment in the scene and be a different character. You get to be that person for the day. That for me is one of the best parts about acting, just getting to be someone else.

Outside of acting and modeling, you and your sister have started a clothing line called “Naked Species.” What inspired you to start making a clothing brand?

I have always been into fashion being in the fashion industry. I’ve gotten a lot of insider information on what’s going to be in and what’s going to be hot. I love to dress myself. I do use a stylist, but in general, I really love styling myself. I love to pick out different pieces. I have this passion for fashion and I’ve been an artist since I was a child, I’m always painting and drawing. I really wanted to do something to give back to endangered species, so I came up with Naked Species. I thought that it would be a great way to showcase the hottest and latest designs that I know will be and people want to wear, but will also give back to a good cause. What if kids bought Off-White and it went to a good cause? Imagine how many animals it could save! With our proceeds, 10% of that goes to Wild Tomorrow Fund which is a charity working in the field right now. It feels really good that each piece I design has a mission and a good cause behind it. One of our most popular pieces is a design that I made that has rhinos that are procreating. I created that from scratch by designing it in PhotoShop and screen-printed it on a few different designs until I found the perfect hoodie and t-shirt. This is a great way to wear something edgy and cool and you know that behind it you’re helping these rhinos.

You mentioned Off-White, but are they any other clothing brands that inspired this clothing line?

I am really into streetwear. I think that unisex is just where it’s at right now. A lot of people, like me specifically, love to wear my boyfriend’s clothing. You’ll find me in his sweatpants all the time! I wanted to design something for both men and women that they can both wear. I love Stussy, and obviously Off-White. I also love the yoga and sporty type brands like Alo Yoga, that’s one of my favorites. I really like Bape too, I like how their monkey logo is incorporated. I also like their use of camo, and we actually have some camo pieces coming out in the fall. I wear a lot of their pieces.

Streetwear is so popular right now, and in the last two decades, we have seen a huge rise in “Athleisure” clothing. What do you think makes this style of streetwear so popular?

I think because it’s comfortable, and people want to be comfortable. For me, I don’t really love wearing jeans because I think they’re a little bit uncomfortable. You will find me in sweatpants almost 90% of the time! Quality is really important too with brands that are doing streetwear. The quality is really good and really comfortable. The colors are also really important. There is a lot of tie-dye going on and a lot of bright colors. We even have some reflective pieces coming soon. Those little tidbits of finishings really make you stand out, and people want to stand out and be comfortable at the same time.

Do you use any specific type of eco-friendly materials with your clothes?

We really focus on quality, so a lot of our pieces are 100% cotton and have really high-end fabrics. But we also want to make sure our carbon footprint is minimal to the planet. We are coming out with a swimsuit that is made of all recycled materials which I am really excited about. It’s going to be launching next month! I’m looking to try to make all of our materials recyclable or that we are overusing the fabric. Our quantities are small, so when we buy the fabric we use every part of it. That’s incredibly important too so we don’t have waste. As far as packaging goes, we like to limit the packaging and not add extra paper. We use recycled paper in a lot of our packaging. We try to source from environmentally friendly production factories.

You clearly care a lot about the environment and life on this planet. It’s so surprising that in today’s day and age people don’t take conservation of the planet seriously. What do you say to people who don’t understand the severity of the conservation of species or climate change?

I feel like it’s quite alarming how severe it is and how people are not aware of it most of the time. Awareness is what we can bring to the world. If people were aware of the severity of endangered species I think they would care about it a lot more. I’m constantly researching, and there is so much information to be found out there. For example, bees are so vital to all of the food that we eat, and everything that you have in your kitchen is pollinated by the bees. That in itself is kind of scary to think about especially because bees are in danger and we aren’t giving them the love that they need. That’s our food supply, that’s so alarming! The cork tree is another example that is going to be extinct in nearly 10 years because of the rate that we use it. If people knew this, I think there would be a push for them to buy wine bottles that don’t have a cork and maybe buy the twist-off bottles instead. If people really knew, it would change a lot of the ways that they do things. Awareness is key, and that’s what I’m trying to do with my designs.

Love this photo by @mr_mattadams_ . You’d be su

26 years ago, this man had a dream. Regardless of

This video is starting to go viral. Listening to t