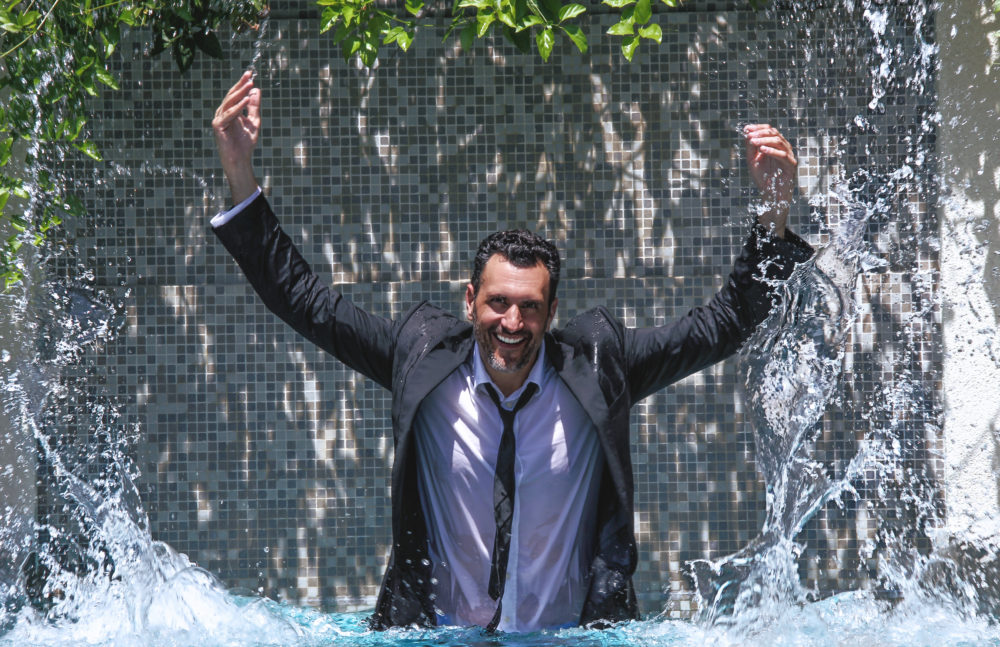 At the perfect time when VH1 was looking for a juicy, new drama, a relatively new face to Hollywood (and a self-proclaimed obsessive fan of television), decided to throw his own unique concept into the hat. “Hit The Floor” was soon created, and whose name was on the by-line? James LaRosa (it’s actually still a shock to him sometimes too).

James, a Boston native, spontaneously decided two weeks after graduating from Syracuse University that he would take anything that was able to be folded or stuffed in a bag and throw it all in a Ryder truck (with a Jeep Cherokee trailing behind on a flatbed) with a friend who was moving to California. The City of Dreams didn’t send James an invitation…he just crashed the party. And like so many hopefuls who pilgrimage to Los Angeles, James felt the bright lights of the Hollywood strip were not only calling his name while in the icy mountain town of upstate New York, but they seduced him. It’s exactly why when the opportunity arose, he didn’t hesitate to leave and make that long trek to the sun-kissed state. He just wanted to tell a story.

“My mom was really brilliant at telling off the cuff stories,” James laughs. “Because she was so good, I thought ‘that’s nothing I could ever do’. And like anything you do, like any muscle, you have to exercise it and learn. When I went to Syracuse University I knew I wanted to major in communications. But, it never occurred to me that I could work in Hollywood. I’m from Boston, and a working-class part of Boston, where people just really don’t leave.” He went on to explain that he realistically thought he would just go back to Boston and possibly work in public relations or write for a local station. “But, when I was in Syracuse,” he continued, “I was around kids who didn’t have those kinds of blinders on. So they were more like, ‘I’m going to go do this,’ ‘I’m going to go do that.’ So I thought, well if they can do it, I could try. Right? So, I switched my major to writing for TV and film and then I just got really into it. [Writing] was like a drug. I was really loving the female characters. I come from a family with very strong women. And I was always brought up to not just respect women, but take them very, very seriously. So (the characters) were just real people to me.”

Just like many of the women James would later create in his script, L.A. proved to be just as real. Of course, his move wasn’t met without the cautionary tales of homelessness, drug addiction, and failure. Not to mention, when he arrived in tinsel town, he didn’t know anyone. As many Los Angeles transplants will tell you, LA is a very scary place when you don’t know anybody. It’s a city that is all about who you know and what circles you’re in, and if you don’t know anyone, well…you’re screwed. It’s a city where you have to be brave. You either have the “stuff” to make it, or you don’t.

“I didn’t know!” he exclaimed in a tone as if reliving the moment. “I knew of one person who was connected to someone, who was connected to someone, who texted someone who I knew. And I don’t mean connected like “powerful” (he says using air quotes). I mean just like, someone I could call. Ultimately, I wound up in a writer’s group. Then, someone in the writers’ group worked at a company and said, ‘oh, there’s a writer who just got a deal here, and she’s looking for an assistant.’ And I was like Kimmy Schmidt,” he laughs. “I was like, I can do it. I was sending my resume as if I had a resume, but I was sending it to shows like ‘90210’ and ‘Melrose Place’. ANYTHING! All I was, was a fan with a dream. But the thing is, as overwhelming as LA can be, there are plenty of opportunities for a fan with a dream, you know? No matter how dumb (the dreams) are. And I include my own. I mean, I was calling people who would have absolutely no reason to answer the phone or return my call. And I’d be like, “Hi. James LaRosa here, I’d like to work for you.” So you know, somewhere you have to tell people, sometimes ignorance is probably the best thing you could have in your life at certain points. And it’s like, this isn’t how this happens. But, oh well. I’m here now.”

People sometimes often ask James which character he’s most like on his blazing hot series. Like most writers, there’s a little bit of him in every character. As he explains his writing process, it almost sounds like he’s in a padded room with 15 alter egos all having a conversation. He talks about a scene he wrote where half of the cast is sitting at a poker table and one character would say something and five different personalities would respond in their respective tones. The early years of LaRosa are a lot like his character Kyle–shameless; doesn’t think she belongs; but always gets the job done. He’s outgrown a bit of that early version of himself. Today, you could say he’s pretty well established, and when it comes to “Hit the Floor,” well, he’s practically running the show. But don’t get it twisted, he’s a writer at heart. On any given day you can find him in the writer’s room, pumped up on caffeine and in a writing frenzy. That’s where he’s the most comfortable.

“From 10am to 6pm I’m in that room,” he says. “If I’m on my own, I’m going to some sort of a coffee shop. I’ll bring my laptop and it just becomes a brainstorming orgy. When I grew up, I didn’t always have the easiest time. I was in my room alone sometimes, which wound up [being written into] the show. [The character] Jelena talked about how she was sort of locked away in a room and hiding out, which was me when I was growing up. I’m very comfortable with being alone with a bit of a fantasy life. Fortunately, as an adult, you can choose not to be [alone] and you can get over some of your shit.”

These days James is actually a pretty social person. However, he’s also just fine with spending his time alone…sort of. “I still enjoy going to the coffee shop, having 18 conversations alone, and just sort of letting my mind wander. That’s my happy place. If we’re in production, I’m (working) 24/7. Whether I’m writing, rewriting, casting, choosing a song, choosing a lipstick, looking at choreography, deciding what the devil’s playground is gonna look like this season, or I’m talking to the fans on social media, it’s the kind of job where it differs all the time. But I do well with that because I get bored very easily. ‘Hit the Floor’ is like a mirror of my mind. It’s dance, murder, music, comedy, drama, business, politics, shade, and sex. I mean there are so many things that go on and I need to switch topics every 30 seconds or I just start twiddling my thumbs. So a production is like that. It’s just all over the place.”

Although, there was a time when James wasn’t always certain the show was going to be renewed for new seasons. Seasons Two, Three, and Four were literally dangling with uncertainty. However, no season had more question marks for renewal than Four. The show was switched from its original home at VH1 to the more urban media network, BET. The change forced the show to have an incredibly long break, which left many fans wondering if the LA Devils were coming back at all. Thankfully, the fans had the patience to stick with the return on BET and this time James was ready to really give it all or nothing!

“BET has been amazing,” James says. “They asked us to just be ourselves and go balls to the wall. So I’m like, okay here you go. You have no idea what you’re asking for! We don’t talk down to our audience. We don’t think that they can only handle a certain amount of information. Sometimes we go fast and furious. And sometimes when you’re doing the ‘mystery science theater,’ you might miss a murder clue that we buried nice and deep. But this show is just fun and it’s meant to be shared. I would definitely not watch alone. I would watch with a bunch of people. I mean, we’re kind of like a movie, but on TV. Because a movie audience is going to be like, ‘don’t trust him.’ ‘What are you doing?’ I mean, this [show] was made for running commentary. (It’s) a little possessive in a way. That’s why we really enjoy social media and why we’re really connected to the fans, and vice versa. I mean, we all watch this together.  The show is designed to make you go, ‘Did that bitch just do what I think she did?’ And you have to say that out loud so someone can answer your question,” he laughs.