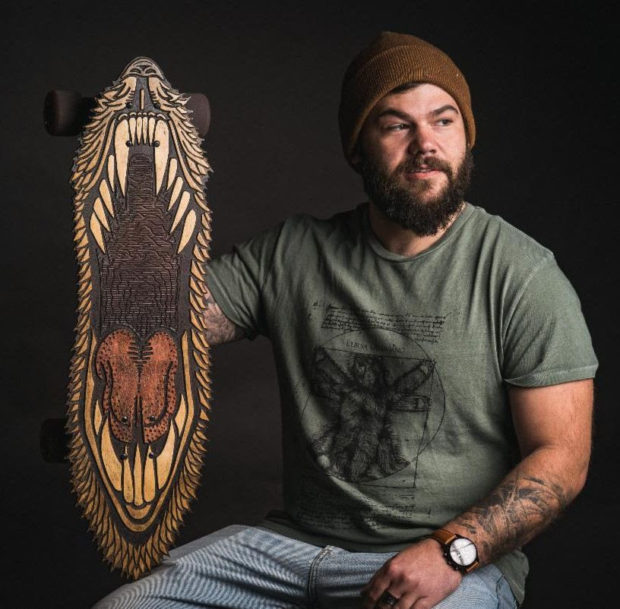 From his art studio in Alabama, famed skateboard designer and pop culture/street artist Bear Walker is changing the face of skateboarding with his iconic one-of-a-kind wood carved works of art that have collectors and celebrities buying up his limited edition skateboards as soon as they are released. His collaboration skateboard with actor Zachary Levi (SHAZAM!, THOR) raised over $50,000 for the Covenant House Foundation. Bear is a true pioneer in the pop art/skate world, taking it from the street to your feet, and has an avid celebrity fan base. He has collaborated with Jason Momoa (“Game of Thrones,” AQUAMAN), Grant Gustin (CW’s “The Flash”), hip hop legend Killer Mike, the Paul Walker Foundation and more to create custom boards.

What makes Bear Walker Premium Boards different than any other skateboard is their complete lack of grip tape. Instead of applying traditional grip, Bear hand carves the top of each skateboard to strategically gain ultimate traction in his stunning designs, and as a result, each board is a work of art. Bear’s distinctive and pioneering creative process has made his skateboards into must-have, ridable works of pop art.

Ushering in a new golden age of skateboarding art, the American-handmade boards are not only hung on the walls of art collectors around the world, but they can also be seen cruising skateparks, pools, and boardwalks. As a diehard comic/sci-fi/horror fan, Bear is also known for pushing his designs into the future by partnering with film and TV studios to produce custom boards featuring superheroes and pop culture legends like Spiderman, Star Wars, The Joker, Stranger Things, Black Panther, Avengers, and The Flash.

Bear is carving culture with a distinctively jaw-dropping new approach.