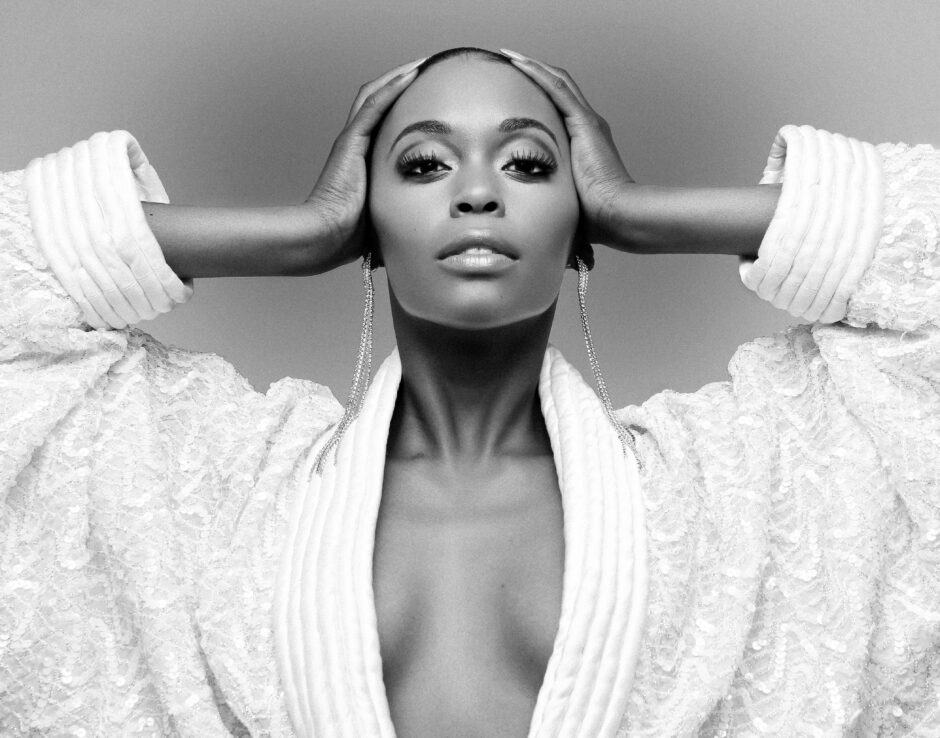 A Star is Born: Nafessa Williams

The photoshoot in this article is a tribute to Diana Ross

We all grew up with our favorite superhero. For most of the boys, it was He-Man, Superman, Spiderman, or Batman. If you were a comic book kid, you were more into Green Lantern, Iron Man, and Venom. Nonetheless, we all had someone we would pretend to be. There were fake capes, and makeshift weapons out of all kinds of household items. For Nafessa Williams, her superheroes were the actresses that she saw on TV who looked like her. The actress and model is one of the lead stars in the DC Comics Series Black Lightning which can be seen on Netflix. She plays the role Anissa Pierce aka Black Thunder, the lesbian daughter of Superhero Black Lightning. Acting was her passion and to have that brown girl representation to give her confidence, she knew that it was only a matter of time before she could be that images for other little girls. While breaking down all kinds of social barriers, The Philly born and bred beauty is up for the task.

“I wanted it to be Rudy Huxtable,” Nafessa laughs as we talk on the phone. She is in Los Angeles in her apartment and I am in Atlanta. It’s warm on both coasts and she is just coming in from a run. “I remember watching TV and I was really young and I identified with the brown girls Keshia Knight-Pulliam, Tatyana Ali, and Lark Vorhees. I would watch TV and be like, “I look like them.” I’m really grateful that I had those images to look up to. And let’s be honest, who didn’t want to be Claire Huxtable. I remember watching TV really, really young and being obsessed with TV. Things like coming home, writing down my TV Guide in my composition book of my favorite shows, and I would imagine being the little brown girl on the shows. I was always fascinated by entertainment, TV, and film. I just didn’t know how to go about it.”

What Nafessa would find is that it didn’t matter if she knew how to go about it. When you have a dream and a purpose that is strong enough, you’ll get the needed push from what many call “The Universe” and you’ll start to figure things out from that point. Nafessa is the first in her family to be in the arts. Whenever you are the first to do something there isn’t much guidance that can be given. Mainly because the people surrounding you may not know the details, struggles, roadmap, or emotions that fall in line with your goals. So like many with an unorthodox desire, it was just a dream that she kept to myself for a while. Because in her view, it was “more of a hoop dream than a possibility”.  The questions of ‘How do I get started?’ would overcome her every time the dream poked her.

“I’m a little girl in the hood from Philly,” Nafessa says bluntly. “Like, yeah right. I don’t live in Hollywood. I don’t know anybody in Hollywood. So, I just went and did what most people would think to do…go to school, get a college degree, and do something practical with my life.” And that’s what she did. He went to West Chester University in the Philadelphia outskirts, graduates with a bachelor’s degree in criminal justice, interned that the DA’s office in the homicide unit in Philadelphia, and worked at a couple of law firms.

SUAVV: In that time frame when you were interning at the DA’s office, that’s at a time when the homicide rate in Philly was really high. I remember living there when, the murder rate, per capita, was the highest in the country.

Nafessa: It was pretty interesting because I actually sat in court cases during homicide trials. When you work in the homicide department of the DA’s office, obviously every case is a homicide. So, it’s very intense. It’s very emotional. It’s very graphic. And it’s a learning experience to see the system at work, firsthand, in your own city. It’s pretty interesting. Sometimes, it was too much for me to sit in on. That experience was what would allow me to see that I did not want to be a lawyer. There’s no off button. You become super obsessed with your cases. You get emotionally attached to your cases. Ultimately, I couldn’t be responsible for someone going to prison or not. At the end of the night, when it was time to lay my head down and go to sleep, it would have been way toon much pressure. So I told my mom, I’ll play one on TV and here we are today. (laughing)

SUAVV: My mom was a homicide victim advocate in Harrisburg for about eight years and it was kind of the same thing. It became a point where like she would go to sleep and she would see the victims and crime scene photos. And ultimately, that’s what took her away from the job because it was draining.

Nafessa: Because whatever you’re thinking of, you’re going to become obsessed with. If you’re thinking about it all the time, and it’s what you’re working on day in and day out, it just doesn’t leave you easily. I didn’t want that. I was like right under some of the top DA’s. Right. So it’s pretty heavy. It’s also pretty heavy seeing young black men getting sentenced. That’s heavy. It was all way too much for me.

SUAVV: I can only imagine what that feels like. When you decided that you’re done and you say, “you know what, this ain’t for me. I’m going to go into acting.” Why acting? How did you get into the industry?

Nafessa: After I graduated college, I was an assistant to a worker’s comp attorney and I remember just going to work and sometimes I would cry going into work because that’s how bad I did not want to be there. I hated it and I remember saying to myself, “what can you really see yourself doing for the rest of your life?” Whatever that is you need to start. I really always wanted to act and model. I told myself to, go do it. And I started, I would take auditions after work and on the weekends. Then, there’s one day I had an audition when I had to work and I asked my job if I can go and they said no. And I went anyway. When I got back to work the next day, my computer didn’t turn on (escalating in laughter). So that was the first day of the rest of my life. I had the boldness to say “I’m going to go for what I want.” and I got fired …and it was the best thing ever. I started going to New York and taking advantage of everything locally that I could. I never stopped. I told myself “if you start, you got to go all the way.”

SUAVV: And that’s the thing. Most people aren’t willing or they don’t have the courage to take that first step. That fear of rejection from industry, family, and friends make people put their dreams on the back burner to please everyone else. How did you handle that? Were you worried about the rejection?