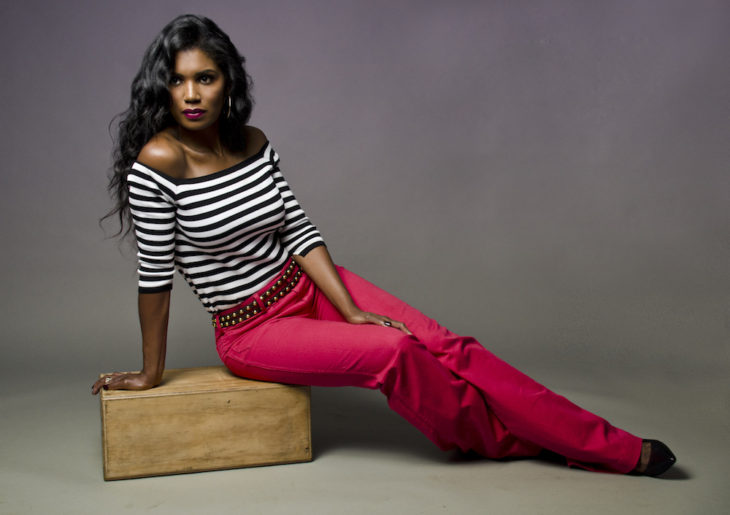 There are certain people who you can remember the first time that you saw them. With actors and actresses, I can most times do the same thing. There was this one woman who caught my eye the very first time I saw her and I couldn’t wait to get more of who she was. Denise Boutte hit the big screen as the mistress, Trina, in Tyler Perry’s Why Did I Get Married. She was beautiful, and while I didn’t like the character she portrayed, she still had this grace and mystery about her that I wanted to learn more about. A little over a year later, I got that opportunity. She landed on his 2nd Hit TV show Meet The Browns as Sasha, opposite of her movie castmate, and now TV husband, Lamman Rucker.

Meet the Browns gave Denise a chance to show a range of who she was. Sasha was funny, smart, loving, sarcastic, supportive, protective, cool, and sweet. All of the things that you would expect from a southern woman. As Hollywood would say, she made it. The show was the #1 rated show for TBS and Denise was along for the ride. However, getting to this place wasn’t as easy as she made it look.

We were able to sit with Denise and talk about her journey to stardom, her upbringing, her view of the future, and why this southern girl has a little spice to her.

SUAVV: I know I’ve seen you on screen starting with Why Did I Get Married? Is that when you got your acting break?

Denise: You know what, here’s the deal. That was pretty much a year and a half after I’d moved to Atlanta. When I actually had the audition and didn’t realize that it was Tyler [Perry] in the room when I went to the callback. At that point, he had established himself as Medea, but a lot of people didn’t know Tyler out of that costume. I personally didn’t. So when I went in for the callback and he shook my hand and was like “I want to congratulate you”. I was reading for Meet The Browns, but he said in addition to the show that I have, I would also like to have you do my next movie. I don’t know if he told me the title of it or not, but I just remember breaking down and crying, of course, at the moment. But, then I got on the phone with my manager afterward and I’m like, “This guy shook my hand and told me that I was the one. I think this guy works really closely with Tyler and they must really like me.” Not knowing that that was Tyler Perry and gave me the job on the spot. That’s not how it goes. That person in the room doesn’t necessarily give you the job on the spot. But again, that’s testament to the man that Tyler is. When he sees what he wants, has in mind, or whatever particular character, he’s the one-man show in the regard that he doesn’t have to hear from anybody else. If he says yes, it’s a go. So I’d say that I was very, very fortunate, very early on.

Denise: I will say appreciation for working at Tyler’s studio because he shoots a lot faster than most. Most sitcoms you got five days to film an episode. Well, with Tyler, we would put them in the can by evening, you know, start in the morning and the episode is done by the end of the day. There is a luxury in being able to find nuances or whatever you know, that you may not be able to find if you’re going so quickly. So there are benefits to both sides of it, you know. But, when you come up with that under your belt, You get this crazy self-confidence because you’re like, if I could do that with that amount of time, imagine what I can do with that extra time in rehearsals. So, just a really awesome confidence builder and one of the best places to hit the ground running.

Um, you know, you might see me in some really interesting horror films. Uh, that was pretty much the gist of what I did. Um, yeah. So what the revenge of bloody bill and way of a vampire sucking blood in one. And I was running in Stiletto heels through a desert and the other one. So yeah, there wasn’t that much up until that point. Everything kind of took off really early on. But when you’re young and hungry, honey, you just do what you got. I have the war wounds from that time, but you know, I just, you know, keep it moving.

SUAVV: What would you say thus far has been your, I guess, favorite role? A lot of people say it’s hard to say what favorite role is because you’re really concentrating on the role that you’re currently in, but did have you had a favorite role thus far?

Denise: I guess I have to go for nostalgic purposes. Of course. My first series ‘Meet the Browns’ first and foremost. Oh my gosh, because we became a family. So it sounds very cliche, but it was more than just a job. Doing that for I think seven seasons, you come back[from the off season], you have a family reunion, and you play and create and you get paid for it. So that, of course, will always stand out. Of course, ‘Why Did I Get Married?’ Because that’s the fan-favorite. That’s the one that stands out to everybody. I mean for goodness sakes, being like right next to Janet Jackson. I mean somebody I got to look up to and love, you know, my whole life. And then all of a sudden I’m like, we’re working together. That’s surreal. Sometimes it was like, is this really happening? It’s really happening, you know? But of course, Lammon (Rucker) and I met or whatever when we were doing that, we, he actually was the person, the first person that I saw when I came out of that audition room when I was trying to dry my eyes, For some odd reason, he was like “are you okay?” And I was like, “yeah”. He said “well dry your eyes. Is it good? Is it something good?”. And I’m like “Yeah, it’s great.” I was like, “oh my God, this man told me I was the one. Oh my gosh.” He was like, “Okay. So just keep it to yourself because there’s a lot of other people out here that are auditioning for this same role that they aren’t gonna get (laughing).” Lammon at that point, was a veteran. He was on soap operas and he had been in the game for a moment and then there’s little old me. Low and behold, that was my husband for all that time.

SUAVV: How was it to be in Atlanta? Because you aren’t from there. Correct?

Denise: I would go there and relocate for the time that we were shooting, but I never actually lived in Atlanta. I’m from Louisiana. After graduating from LSU, I lived in Dallas, Texas because I was in advertising for about four and a half years and then moved to Los Angeles. That’s when acting really began. Being more dedicated that is. When I came to Los Angeles, I had a couple things under my belt, but it was more so things like print ads. The only thing on screen was the Texas lottery girl. I had big hair, glitter dresses or whatever when the lotto numbers would roll out. So that was exciting. One random day, somebody was like, “did you do pageants?” I was like, “yeah”,(laughing). That was the closest I got to a pageant. I am not that coordinated. Falling in gowns coming down the stairs…that’s not my thing.