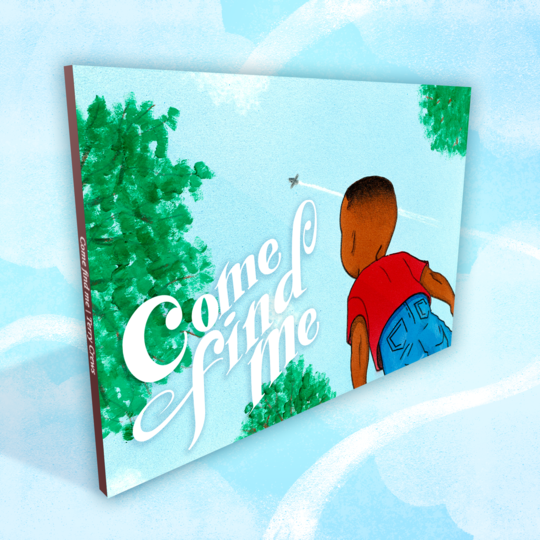 If you think back to your childhood, cartoons weren’t really a representation of real life. Bugs Bunny was a gray rabbit. Tom and Jerry were cat and mouse. And the Mickey Mouse Club was an array of animals. So what happens when your child comes home and wants to be a part of a contest where the prize is being a cartoon character? This is what happened with former Washington Redskin player Ken Harvey 21 years ago. Ken was a role model father. You know, the type that shocks their neighbors when they are walking with their kids through the neighborhood. Nonetheless, his son’s excitement was met with dismay. He had never seen a black cartoon. Being a father and a man, Ken did what he felt was his responsibility. He gave his boys a book with a visual representation of themselves.

“I wanted my son to see himself as a character, but I want any other kids that see themselves as that characters also,” Ken explains as he travels to another book signing for the newly released children’s book ‘Come Find Me’. “We tried to make a point of making it a simple book, you know, but also using my boys as characters. The book was done 21 years ago for my sons Anthony and Marcus. Terry Crews and I were playing football with the Washington Redskins. Terry was a phenomenal artist, and even so now. This was before he was famous. I gave him the words and said this is what I want with the book. And, you know, some people just link up and it’s just a natural fit. He just blew it out of the park with the artwork. It was phenomenal!”

With the strenuous training and game seasons, Ken made sure to be home as much as possible with the kids after games and during the off-season. He has a solid wife and co-parent along with amazing babysitters who he calls “a blessing”. He wanted to be the man that his father was. Ken’s dad worked two jobs to take care of his family. We laughed about a time that he was so tired coming back from work that he fell asleep giving the kids a bath. So when the book was originally released, his kids were excited that their faces were all over the DMV. The Washington Post took notice of the book and mass printed them so that Ken and Terry could distribute as many as possible to the area kids. Ken’s kids, at the time, were 6 and 4-years-old. To them, dad was a normal guy. He was out working to provide them with a better life.

“For me, as a dad playing football, be as famous as you want, I wanted to make sure that my kids knew that I loved them,” Ken explains. “You can show it by your deeds. You can see the words by your actions. And hopefully, parent them along the way.”

As the book began to dissipate, Ken went on with his football career, his kids grew up and became teenagers and the book became a file on the computer. Ken, then wrote another book. Brothers of the Storm. The boys were 16 and 14. They both went on to graduate from high school, college, and both gained a masters degree. He parented them through their lives. Terry went on to become an actor and established himself in the entertainment arena. 21 years later, Ken found that the conversation he had with his boys in the past were the same conversations that he was having today. “Be careful with your interactions with police officers”, “understand how society views you”, “know that you are a black man”, just to name a few.

While sitting at home going through what he will do next, ken was reading the bible and Exodus 4:2 stuck out to him. While Moses was having a conversation about doubt with God, God spoke to him: And the Lord said unto him, What is that in thine hand? And he said: A rod. Ken then turned that verse to himself and asked what did he have that was already feasible. His book came back to the forefront. Though representation had gotten better, it still wasn’t where it could be. Ken began to make some calls and as Octavia Butler wrote in Parable of the Talents “In order to rise from its own ashes, a phoenix, first, must burn.”

“I called up Terry and he was just like, ‘man, you know, if we’re going to do it, let’s do it 100% and do it right.’,” Ken says passionately. “He kind of took the bull by the horns and it really made the book really nice. A little bit later, another friend of mine, Enrique, said he had an augmented reality company. I thought it would be great to put the two together because if we do that, it’s a nice enough touch that it’s a bridge between technology and reading. We see all these kids all the time on the iPhone and iPad. To me, the biggest joy is if you could spend some time with your kid and reading. They may not remember the story, but they’ll remember that bond. They remember you sitting with them and joking with them, laughing with them, and even making up stories. With the augmented reality, I like to think we’re the first to do that. It’s cool two African American dads are the ones who are doing that using technology as well as the reading and the reason behind it.”

Ken understands the importance of being able to see yourself in images doing positive things. Talking about James Evans in Good Times, or the moment that he saw Ernie Hudson in Ghostbusters and how that made him excited that these guys that were strong symbols of Black men and what that same image could do for kindergarten and first graders when they read a book about kids that look like them doing things that they do. While not pointing fingers at anyone in today’s media and entertainment, Ken also realizes that there is an undertone of a lack of Black Fathers and positive public role models. Ultimately, his goal is to make a dent in the perception by authoring a book that allows kids to say “I can fly a plane, I can be on that train, I can be an astronaut, I can be a CEO. But we would be shortchanging his journey if we created the perception that this was his goal.

“God was telling Moses, in your hand, it’s just the staff, but if you trust me and put it in my hands, it can part the Red Sea,  it can free millions of people,” Ken says. “Here, I have this little book that seems so simple and for a long time, I ran away from being classified as a children’s book author. I wanted to be an author. I’ve written everything. I’m not just a children’s book author. And it just comes back to God saying, just trust me. Don’t despise small beginnings and just trust me. I say that with all humility, Terry has this huge platform and he’s such a great guy. I mean he’s bent over backward to make sure that if anybody writes anything, they make sure they say it was written by me and that he does illustration, but that I get my props. Way back when, when we were both just trying to be dads, he’s a great guy and still is. I feel blessed that we still have this friendship after all these years because things could change and people can change.”