The title of “Basketball Wife” in the past was interpreted by many in the public as groupies and gold digging. Then came along the women of the NBA that were seen as the wives of the players and all that this entailed. One of the NBA’s most visible and recognizable wives would be Jackie Christie, wife of former NBA star Doug Christie. Jackie first became a sensation of the sports media not because she was a diva or because she was high profile. But because of the support and relationship that she showed publicly. And the famous game that Jackie charged onto the court swinging her pocketbook in defense of her husband’s tussle with Rick Fox showed the world that she was ready to go to war for her man and that Jackie was no groupie or a trophy wife.

You have to understand the woman that Jackie is. She is a business woman at heart. She was always the organizer and the motivator of the family. She took pillowcases and turned them into make shift wardrobes for her sisters to model on the kitchen floor aka “The Catwalk”. By nine, she had a family newspaper and by 16 she was literally employing her friends to take on ventures with her. So when she was being set up with Doug by a mutual friend, it wasn’t her piece of cake. The friend, Steven, told Jackie all about Doug, and finally dropped the bomb that he was a basketball player in college. Jackie quickly responded, “No. No thank you.” She has her concept of what Basketball players were…PLAYERS. And she wanted no parts of it. Six months later, she got a call from the friend that set the basis for her future husband.

“Steven called me and was like “Hey were at the sports bar restaurant eating and it’s like a club going on, you should come up here he is here,” Jackie explains. “I didn’t want to go and he told me to just come up here real quick and I ended up going and that’s how we met. It was too funny, when I got there, there were girls all around him and I was like “see, I already knew what type of situation this was.” So I started to turn around and walk out but something told me to go over and Steven waved me over and was like “come here.” As soon as I walked up and Doug’s disposition and the way that he was really a gentle man and he took my hand and the eye contact and didn’t seem to be overly trying to flirt or anything. He was just really nice to me and told me that he heard a lot about me. It was really a sweet meeting and we exchanged phone numbers.”

“I really wasn’t interested in meeting him. In fact, I had on overalls, a t-shirt or a tank top or something, and some flip flops with my hair in a ponytail. No make-up or lip gloss or anything. I wasn’t dressing for the party. Everybody was all dressed up and all. It was hilarious. And when we look back on it now, I say it must have been meant to be because those girls were dressed to die for. All of the guys looked nice and I just jumped in the shower and threw on something comfortable. I’m a Seattle girl at heart. And he was telling me “you were the prettiest one in there” and I was like “aww that’s nice”. It went on from there. He didn’t call me right away, but every time I would see him after that, he would be with his friends and there would never be any girls around and we would just be friendly. Then one day we were at another event and that’s when I said to him “Overtime I see you, you smile and you wave but are you scared to talk to me or something” and he was like” no I’ll call you tonight” so I said “okay I dare you” and then he called me that night at like 3am and he was up with his sisters cooking eggs and bacon and I was like okay you’re after my heart because I’m with all of my girlfriends and were cooking eggs and bacon too. At that point we became best friends.”

Being the best-friend, girlfriend, and eventually wife of a NBA player is above all things a relationship. It takes support, trust, motivation and understanding. Jackie and Doug not only knew this, they showed the world how it should look. The wives of the players, were very low-key, showed up to home games and maybe the playoffs. But to be at all of the games throughout the season…no, they didn’t do that.

Jackie changed the image of what the Wife is. She was in the stands of every game that Doug played. This wasn’t because she didn’t trust her husband around the women at the games, surrounding the hotel, or in the clubs. It’s because she wanted her husband to know that his support team was with him, win or lose. It was about support. They found ways to communicate while Doug was on the court. While Doug looked like he would be calling plays, he was actually talking to his wife.

There was a set system that Jackie ran like a military operation, in her words. “Everybody knew that on game days, dad needed his rest and this is what he liked to eat, the phones are off, business has to be handled during these hours the day prior or after,” Jackie says. “I ran his agents, I ran everything. That way he could just go out and have fun and he had a long and luxurious career because of that.” Now, the retired Christie, gets to be that support basis and watch his wife on TV calling the shots.

The hit series Basketball Wives tracks the lives of the women behind the men of the NBA. The Show creator Shaunie O’Neal, ex-wife of Shaquille O’Neal, wanted to show that the live of the NBA Wives aren’t what people think. There are still dilemmas, dramas, and issues that go along with what the public sees as stardom. While the series has been a success in being filmed in Miami, Shaunie wanted to show a different light with the wives of Los Angeles. And a different light is exactly what the producers of the show were able to generate.

“I’m really good friends with Shaunie,” Jackie proclaims. “I see her vision and I respect what she is trying to do and it feels really good to me to not only be a wife on the show but to also have the girls look up to me for guidance and lot of they tell me how much they respect me and what me and Doug have and that kind of thing and I like to mentor them. I am the mentor on the show. I don’t pull punches. I’m very in your face and to the point but I think they understand that that’s just how I am. I don’t have the time for none of the ruckus. I really wasn’t worried too much about who the other cast members were because I am confident in who I am and I wanted to show the world what it is to not just be an NBA players wife but what happens when they hang up their shows. It’s a lifespan and I am able to show that. It’s gonna be real up in peoples face for what they are not expecting. I know for a fact from being a part of it from the beginning until now and shooting daily. It’s going to be a lot that people will learn and be surprised about. People will laugh and cry they will feel emotions, they will identify and it will be interesting.” 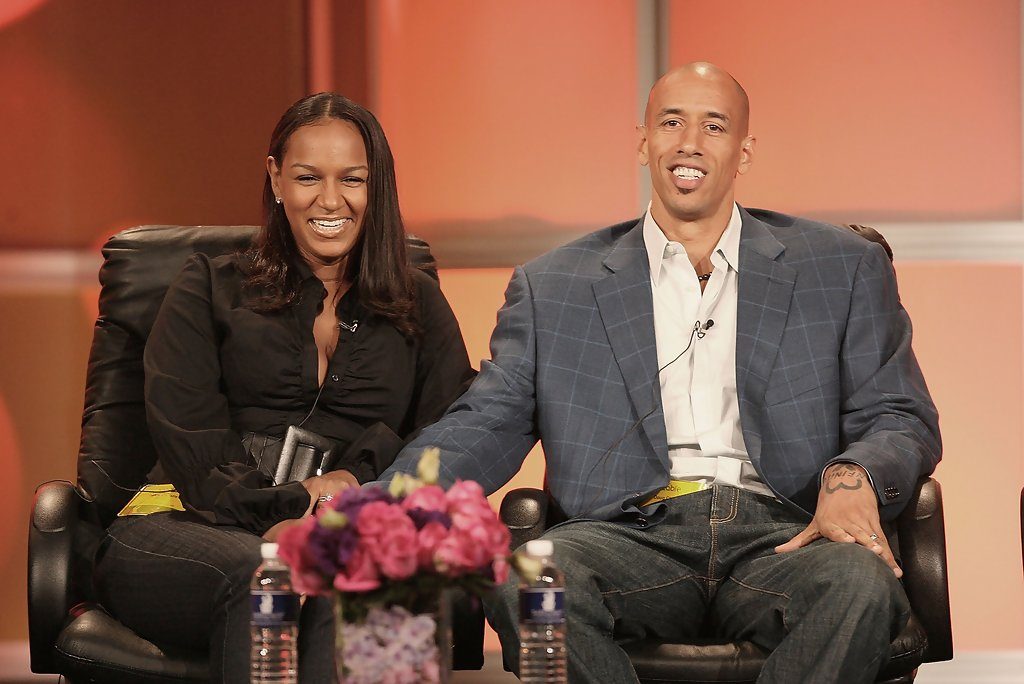 When you look at the transformation of the mentality of the general public’s understanding of what a Pro Athletes Wife is, the concept and reality of the title now goes a lot deeper than ever before. Jackie is considered to be one of the reasons for this. This show isn’t just about the drama that will be seen, nor is it about the money or the quick paycheck. These ladies put their lives on television to show that the old saying still holds true, “Beside every good man, there is a good woman.” Now more than ever, this phrase needs to be placed in the homes of our society and the value of marriage and relationship will grow. Maybe it’s a little far-fetched or to some unreasonable, but theses Basketball Wives may be setting the tone for the Doctors Wives, Janitors Wives, Architects Wives, and Teachers Wives.

“It’s really cool now to look and see how the wives now feel that they can be how we were and the husbands are welcoming them to do that,” Jackie reflects. “I think it was a certain way that society viewed the athletes when me and Doug first started, that the player went away and did his thing and he partied and he did this and he did that and Doug was different. A lot of times we were bombarded in the media because they didn’t understand and I knew once they would see that there is no difference in anything that we are doing than anyone else it’s that I Love my husband, I’m dedicated to our relationship and our family. Right now he is doing his thing and I am there to support him and when he hangs his shoes up then I will do my thing and he’ll be there to support me and that’s the way that it should be.”