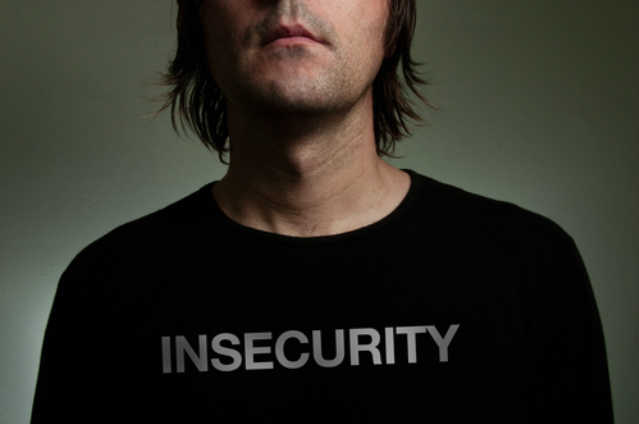 Honestly, the male insecurity is an issue that may not surface in relationships until it’s the wrong time. The first thing that comes to mind when we discuss this issue is a man’s jealous rage. There’s probably nothing any natural man can do to keep from getting jealous when he sees (or even thinks of) the woman he loves, giving someone or something else more attention than him. So for all men & (women) the key to it is only to learn how to control your reactions. Lol. No, but really let’s get into some insecurity issues that are not given as much attention and can escalate into major problems.

The number one male insecurity alongside jealousy is money. “A person’s status depends on salary” at least that’s what a rapper named AZ stated on the classic NAS album Illmatic. And in today’s fast-paced and money-driven society, men are judged on just that. The pressure of providing more for your significant other is an insecurity that the majority of men have. He may say he’s okay being an “average guy” until some other man drives up alongside him sporting an S-Class Mercedes Benz. Then, that same guy looks over at you and your woman (with a quick piercing stare and a flirtatious grin) while your car putts and squeaks with an overworked four cylinder engine. The nail in the coffin is when his lady looks back a little too long.

It’s discouraging. And this is what really makes men cry in the dark. He may not say anything at that moment, but he will begin to beat himself up about all the missed opportunities, wasted time, and mistakes he may have made in his past. After which, his attitude changes, he no longer likes himself, and for a brief moment, he’s been hit with a strong dose of reality. It starts to become too much to swallow. He begins to question himself. He wonders if he is a failure. His anger then begins to bleed out into his relationship as he now vents his frustrations out on his lover. He accuses her of wanting someone like this guy who insulted his manhood with a V12 600 Benz. After not being able to take another minute of his self-pity and cynical thoughts of her sleeping with Mr. Fantasy he begins the interrogation.

Not being able to take another minute of his self-pity and cynical thoughts of her sleeping with Mr. Fantasy, he begins the interrogation. He wants to know if she would like a guy like that. Any answer at this point is the wrong answer. He begins this unnecessary argument about a guy no one knows and will probably never see again. A few of these moments will soon it ends in a breakup. This is how the insecure man relieves himself of all the pressure of not being able to financially satisfy his woman. It’s the quick and easy way out.

If you pride yourself on being a real man, you must admit if you were in Mr. Average shoes it would be embarrassing as well as insulting. The man who’s comfortable with himself (whether he has or not) has a personality that’s not defined by money or even by the woman he is with. This man will handle this situation totally different. If you are that real man then this situation, a compliment on the car would have been a start. Celebrating another’s success is the best way to promote your own drive to success.

We can touch on a multitude of insecurities for every type of man. Most have learned how to deal with them when they fall in the category of physical appearance. Yet, money is (and has always been) what most men pride themselves on, and the average guy’s manhood is challenged when he feels he’s outdone. If you find yourself in that category, use it as a test. Tell yourself who in your life, are true to you, most importantly a test to see if you, support you one hundred percent. While you are on your road to riches, or whatever insecurity you may have to conquer in life, remember failure is only another step closer to success. Life is a learning process.