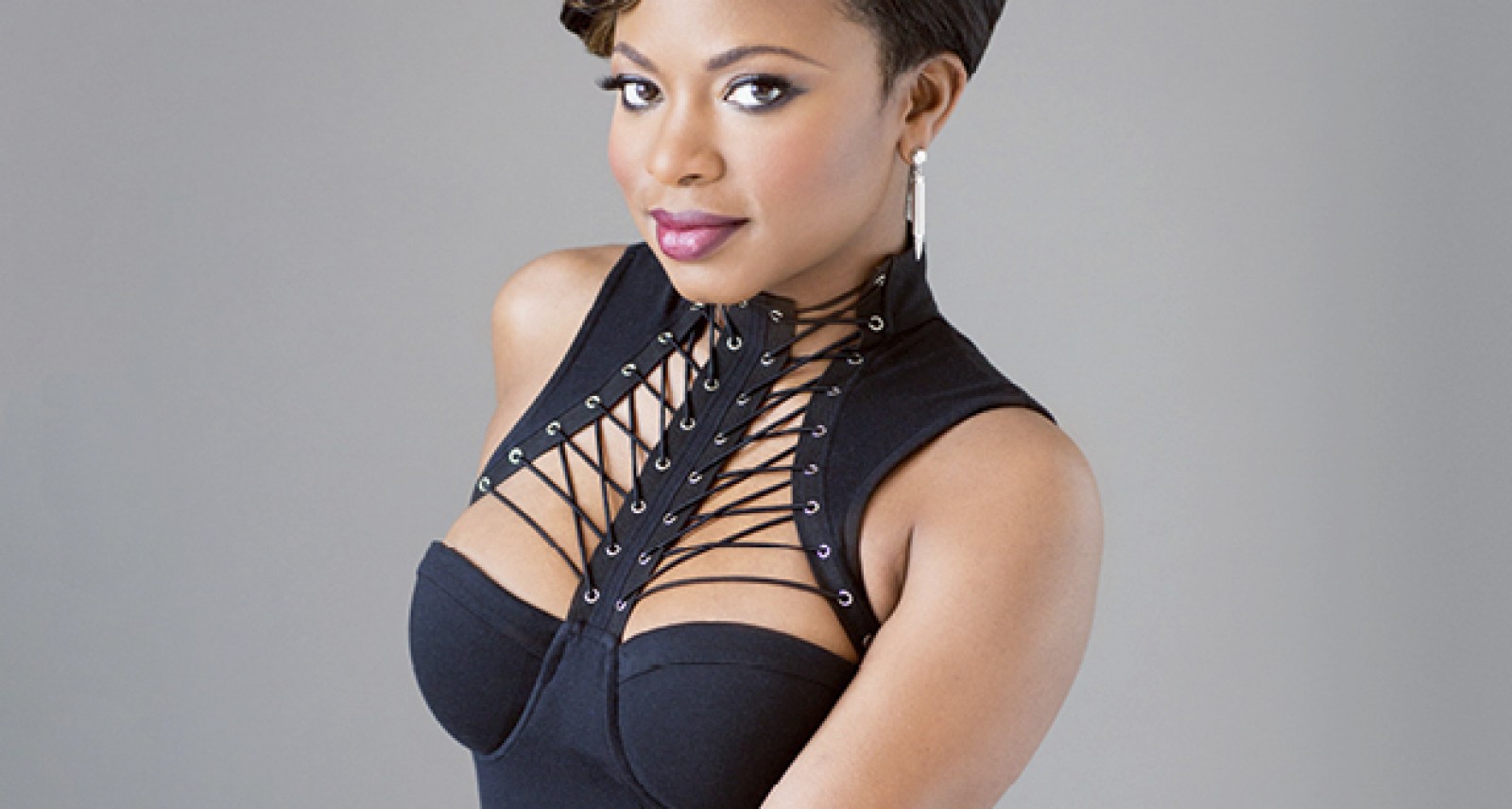 Though she didn’t get a chance to see her break until later in life, acting for Naturi Naughton began with her singing career and her passion to be an entertainer even The 26 year old East Orange, New Jersey native accelerated her career as a 15 year old pop star to performing on Broadways Hit ‘HAIRSPRAY’ and leading roles on the sets of Hollywood projects ‘NOTORIOUS’, FAME’, ‘LOTTERY TICKET’. Even though the process had its bumps in the road, Naturi was consistent to one major trait–keeping true to herself. For the typical person her age, it would be very easy to lose yourself in one of the roles. Especially as the hardcore female rapper Lil’ Kim.

“It’s interesting because I didn’t believe that I could conquer the role,” Naturi says. “I had to build up my confidence and my ability as an actress to really transition and do something totally different it was a challenge and I love being challenged and that was very different from myself.” Lil’Kim, being the outspoken vessel that she is put the quiet and reserved Naturi in a position that she wasn’t used to. Nonetheless, with all acting opportunities, a little piece of the character wears off on you. The role gave Naturi a splash of self-confidence and the ability to embrace herself as a woman.  Beyond the mental advancements, she had to make sure that she could pull off the sexy persona of the rap star.

“I was most concerned in the area where it came to some of the scenes and how sexy she had to be and the fact that my character wasn’t going to be wearing many clothes for most of the movie,” Naturi laughs. “But I had to swallow it and say ‘you know this is the character and I’m portraying a real person and this is going to help me as an actress down the line and I have to take a leap and a challenge’.  I was in the gym everyday. I was trying to make sure that if I’m going to do it I’m going to do it right. At the end of the day, anything that we do whether we’re nervous or scared you have to do it with all of your heart and soul and that’s what I was going to do.”

With her first major movie wrapped and under her belt, Naturi didn’t sit back and take in the success, she returned to Broadway to finish the contracted run of ‘HAIRSPRAY’. “I’m one of those people who doesn’t get all Hollywood,” she says. “I don’t fall into the hype. I don’t say you know I booked a movie and I’m going to chill out. I went back to work and was ready to go on to the next one.” Given the opportunity to film the movie and return, was a blessing for her. She put her feet to the ground and continued performing 8 times a week as well as auditioning. 3 months later she landed the role of classical pianist trained Denise in the remake of ‘FAME’. 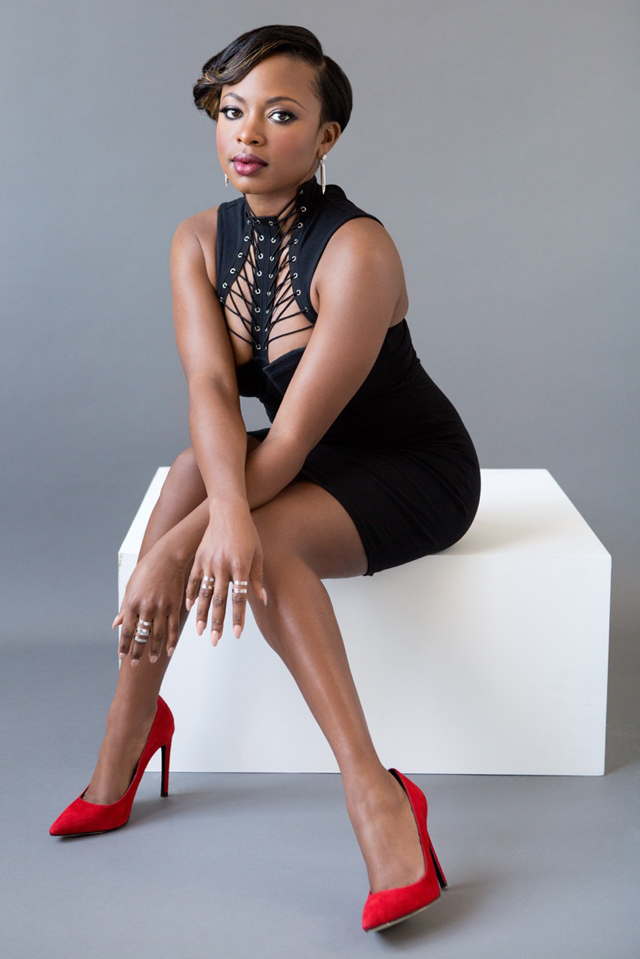 “FAME was a lot of hard work,” Naturi chuckles. “Everything that I could do with dancing and singing and acting I had to implement into the role. Playing the piano in the one scene is something that I didn’t do. I learned and perfected classical music which was another challenge just like Lil Kim was a challenge. When you see that scene (performing ‘On My Own’)I really learned to do that. So, I am really fortunate. I was really proud because I didn’t know how to do a lot of what I did in the movie until I worked with my (piano)coach. I worked three times a week studying and reading the music and studying the posture of a classical pianist. I love to play because it gives me peace of mind and time to think.

Even though she wouldn’t put on a concert of a classical pianist, Naturi learned to play Beethoven’s Moonlight Sonata and Chopin Nocturne in G-Minor. Even though she doesn’t know many songs, she purchased a piano after the movie and utilizes the stroke of an ivory key to relieve the stresses of the world. It’s one more skill that she can add to her acting resume and allowed it to build her as a person.

The next skill added to her resume would be learning to laugh and relax. This would come with the help of director Eric White and the cast of her next movie ‘Lottery Ticket’. Eric knew Naturi from her days in 3LW and was always supportive and liked her vibe. Therefore, after linking up with rapper Bow Wow and comedian Brandon T. Jackson, it was an instant connection. Never having done a comedy, it took Naturi a while to adjust to all of the jokes on set.

“I already knew Bow Wow because we came up in the business together and we did a bunch of tour dates together,” Naturi explains. “We knew each other since we were like 15 but I hadn’t seen him in years. But, he (Bow Wow), Brandon, and I were road dogs. They played a lot of practical jokes on me. I was like the mama of the group telling them to act right and every one was making fun of me for that. But it was like being around a family which was really great.”

Contrary to belief, the 26 year old star to be has had her share of ups and downs very early in her career. There has been speculation for years on the relationship with her and the former members of her group 3LW. There have been rumors about how she left the group and why she left the group. Tired of the dwelling and the lies, Naturi is putting it all on the table.

“I will basically say it was one of those situations with the group where I was not treated the right way and respected as a full member,” She explains. “There were 3 people and should be treated equally and it wasn’t that situation. What happens is when you get a little success, people within the group, management or outsiders do things to taint the relationship which is something that happened with us. Success changes things and it’s so unfortunate. You come up together and you’re close when you don’t have a record deal. But then when you get a platinum album, the whole dynamic of the group changes. But it’s sad because I feel like we could have been the next Destiny’s Child. But management and the whole deal was just a negative time in my life. It took a lot for me to get through that and pick myself back up. So, when I talk about it, I try to help other people be encouraged. Because a lot of people were asking what happened to me and why I just disappeared or that I wasn’t going to be able to have a career and I am really grateful that I was able to get through the break up with the group and come back on my own.”

Naturi credits her success to her fans and industry professionals that continued to believe in her and weren’t afraid to give her a chance. Now, she is ready to show the world how much of a multi-talented and multi-faceted performer she actually is. She would love the opportunity to record music again, yet, it’s something that she has on the back burner for the moment? Once she has the right backing some of these artists are going to have a problem on their hands. For now, Naturi is focused on being the best actress that she can be. She is focused on her dream role hoping that a producer somewhere finds it to be interesting. Showcasing the life of Civil Rights Activist Coretta Scott King.

“She was a classical singer and studied classical musical and was thinking about being a professional singer in opera,” Naturi says with excitement. “I’ve been researching and studying and it would be awesome if I would be able to show some of her behind the scene strengths and being able to support Martin Luther King Jr. and the movement. She did so many things that people don’t know about. And I would love to portray her. Holla at me producers, Holla at me.”