HESTON defines his journey as a full-time musician, composer, songwriter and producer. “Creating timeless music has always been my ultimate goal,” says Heston with a poised, yet humble demeanor. “I want to leave the world with music that can be played for a lifetime.” The position as a correspondent for any media outlet allows you benefits that no one could possibly imagine. We attend various functions; meet VIPs, travel and every now and then come across a pleasant surprise! Meeting this young man was one of them. As I was attending an event bringing awareness for AIDS in Atlanta, this young man was one of the featured acts. His stage presence, performance, and vocals were so mesmerizing and fresh, that I felt he deserved some SUAVV Magazine love! So, I now have the honor of presenting to some and introducing to others, HESTON!

SUAVV: Hey HESTON, I want you to know that I really enjoyed you the other night! I didn’t know and was pleasantly surprised to hear that you’re actually local! Tell me a little bit about the man behind the vocals.

HESTON: Thanks, Michelle and yes, I am living here in Atlanta. I am a true West Indian I was born on the Island of Dominica (British West Indies), where I lived until I was in my pre-teens before moving to the United States. I am very much a West Indian to the point that sometimes I am on stage with flip-flops on. The type of music I do today has a lot to do with the music I grew up listening to. My mother sang a little bit in the church, and it’s funny that to this day, I recognize how much of an influence she was for me because through her, I was introduced to Al Green and a lot of different artists. My father passed away when I was seven and I listened to the tons of albums he had. But, it was really my mother’s influence musically that I was exposed to and the radio stations playing all kinds of songs from different artists like Nat King Cole to the Bee Gees to Quiet Riot, you name it and it was there. All on one station! The difference is in the United States, now my stations are programmed to 107.5, 102.5, maybe Michael Baisden, V103, although they’re decent stations, it’s really limited when you think about it, because I’m not exposed to country, rock or classical on a regular basis as I was as a kid and I think what I regurgitate in my music has a lot to do with me as a kid and what I grew up listening to. I guess I was subliminally influenced.

HESTON: (Laughter) I think I always did. Especially after seeing the Michael Jackson’s video “Beat It”. I knew that music did something else for me. It wasn’t that I just enjoyed it and it wasn’t that I wanted to necessarily be Michael Jackson, I wanted to be THAT…whatever THAT was, I wanted IT, and I used IT every time I sang or listened to someone sing , it hit me differently. Even a couple of days ago I was having a very serious conversation with a close friend of mine about how some people just will not get that I bleed music. Literally, the story of music sometimes can be serious. You go through your ups and downs but honestly speaking, if I were handed a career that made me a million dollars a year and you asked me to let my music go, I can’t tell you that I would do that. I know I wouldn’t. I write the lyrics because of what I experience. I literally put my blood in the words.

SUAVV: It’s very evident in your performances. You have a great aura when you are on stage. You are very passionate about what you are singing.

HESTON: When I’m on stage I am very close to emotional, like a heartbeat away from outward expression. I saw Eric Benet on an interview say, “Don’t let anyone fool you, everyone sings to get the girls….” and that is so not representative of everyone that does music. I do music because I have no choice. It’s my catharsis.

SUAVV: Cool and it definitely shows. You mentioned earlier that your mother sang, though not professionally, she still sang. Were there any other musicians in your family and are they supportive?

HESTON: No, just my mother and she sang in church some of the time. That’s where I started. My father was a defense attorney, Interim Prime Minister of Dominica, Attorney General. I look more like my father that anyone else and after his passing, my mother always wanted me to follow in his footsteps and be a lawyer and etc. That is what is expected on the islands, to go to school to be a doctor or a lawyer. At some point, it just turned me off. When I went on a tour of the Caribbean and stopped back home on my island, where I did a music in the school program for Convent High School I met a young girl, last name “Pepperhart”, sixteen years old and crying because she knew I understood. She was so talented and her parents insisted that she leave music alone and become something else. But when you hear her the music just oozes off of her. We always look for the approval of our parents regardless of what we say outwardly because inwardly that is what we want. Even though I didn’t follow in my father’s footsteps, I can see that through the years regardless of how much I struggled, my mother has always been 100% supportive and in my corner. 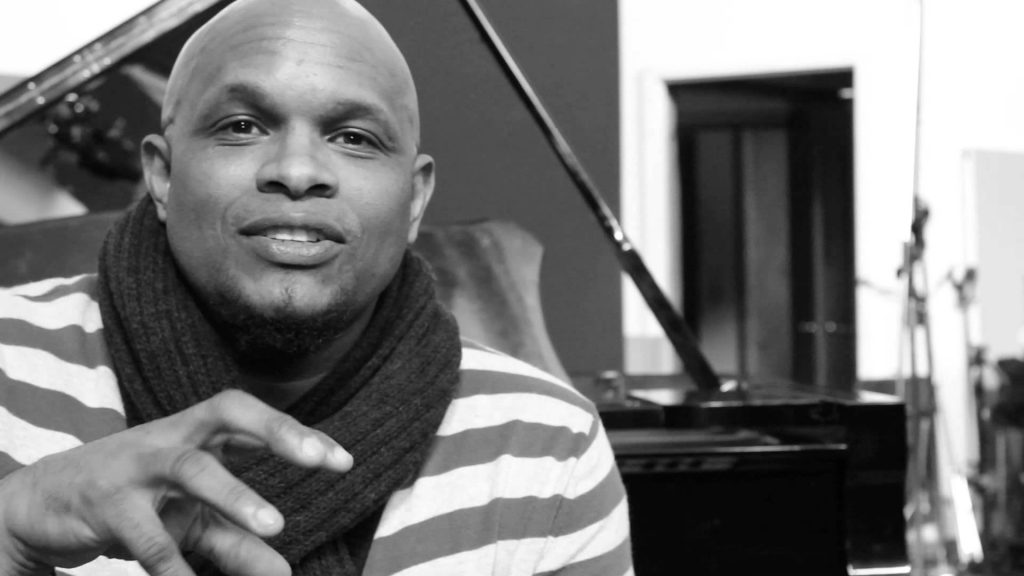 SUAVV: How long have you been singing professionally?

HESTON: Professionally, since 2003. I am working on my third full-length album, “Love Junkie”. We will be promoting it around July. I have written, produced and arranged my other albums, but, this time, I am allowing others to work with me.

SUAVV: I’ve read a couple of reviews about you and wanted to share them with you. “A throwback to the best of the 70’s…mellow soul”-Ebony. “Reminiscent of a class like Wilson Pickett”-Atlanta Constitution Journal. “Music transcending age, time and genre, his voice is amazing and his music touches your soul. If you have not heard him, you are missing one of the greatest singers of our time”.-United Negro College Fund-Alicia Smith. What do you think when you hear others speak of you in this manner?

HESTON: Humbled, but with a sense of insecurity because there are so many amazing performers who are at the level of those write-ups. I don’t see myself that way. I have always wished I could attend my own performance and SEE me perform through the eyes of the audience. I guess I am my own worst critic, but it allows me to continue to grow.

SUAVV: How do your children view you now that you have almost three albums under your belt and videos?

HESTON: I’m just dad! (laughing) They keep me grounded! My daughter has a beautiful voice, much better than I was at her age. I taught my son Donny Hathaway’s ‘This Christmas’ last year and we’ve been singing it even when it’s not Christmas! (chuckle) We keep music between us at all times.

SUAVV: Thinking about the memories you are creating with them, that’s awesome. What’s next for HESTON?

HESTON: If I had all the things that I want in the immediate future, I would love to dig my hands into some form of nonprofit work for women and children. It’s a passion of mine. I’vec dabbled in it here and there but I want to be involved on a much larger scale. I also will be promoting a campaign that will start around the Essence Music Fest encourages people to support their local independent music stores, especially if their genre of music is jazz, soul or R&B. I will be promoting free samples for my new album, Love Junkie and if you happen to be at the Essence Music Fest we will be giving away music samples, doing interviews, online radio, and regular radio.

SUAVV: Where can our readers find you?

SUAVV: I love your music and your spirit. I’m looking for more great things to happen for you. I know that as we speak you are currently in the studio and I need to let you get back, but thank you for taking some time to sit down and speak with us, it’s been a pleasure!

HESTON: You’re welcome, Michelle and thank you for the interview. I’m sure I’ll be seeing you around. I sent you some links to a couple of places that I’m sure you’ll enjoy while you’re here in Atlanta.

I love surprises and this young man was definitely one of them! He’s handsome, extremely shy, but he brings nothing less than his A-game to the stage allowing the audience a moment of time in his intimate space and thoughts! He has a vastly growing international fan base and has played at the Apollo Theatre, The Blue Note (NYC), Sambuca’s Jazz Cafe, BAM, Highline Ballroom, Hard Rock Cafe, SOBs, and Blues Alley to name a few and is graciously accepted whenever he goes. His sound is mellow, soothing, romantic, and full of old school groove and passion. If you listen close, you can hear the slight undertones of the Caribbean. He has an awesome spirit full of humbleness and humility. HESTON is a perfectionist. The precision of his music both on his albums and love is unparalleled in this day and time. You can’t quite put a finger on who he sounds like, because he doesn’t sound like anyone, he sounds like HESTON as he should, and that sound will keep him on the charts for years to come! Look him up and I am sure you will agree with me as well as his other reviews.