Visanthe Shiancoe really gets into a zone when he’s playing Mortal Kombat vs. Dc Comics on his Sony Playstation 3. It’s probably comparable to the same zone he gets in on the field for the Minnesota Vikings playing his tight end position. What makes it even more interesting, is that he’s not just playing against the system, but with a real person connected somewhere out in cyberspace.

“This is where it goes down right here,” Visanthe says about his enormously spacious basement, where he spends countless hours playing video games, watching movies and eating snacks that get left in his favorite chair in the room.

These days, Visanthe, like many athletes, takes refuge in his home and competing with unknowing fans and potential fantasy football owners. But that’s a far cry from who he was as a kid. Like many of us, his days were spent playing football in the middle of a street mimicking the abilities of gridiron greats John Riggins , Joe Theisman, and Art Monk hoping a car wouldn’t ruin one of the best plays of their childhood. With the progression from little league through high school, he took his pigskin skills to Morgan State University. This was the point in his life where he not only played football but entered into the game of life through the eyes of the Historically Black University…an experience that attendees have always been very fond of.

“The camaraderie, the closeness, just knowing that someone can relate (to you) in that time of growing and getting to know yourself and to know that someone grew up the same way that you have, and have experienced the same things that I have,” Visanthe explains. “They really teach you how to deal with adversity. A Division 1 AA school there’s more that you have to do and handle on your own. Things aren’t really given and the roads aren’t really paved for you so you have to create a lot of opportunities yourself.”

That’s exactly what Visanthe did. In a team meeting when his coach announced that he could be drafted to the NFL in the second round, he knew it was time to really put things into gear. Up until this point, football was a gift and a way to be competitive. The future star was more focused on school and becoming an IT Specialist soon after graduation. He was applying for internships and going to job fairs. But in that instance, he knew that it was time to take football a lot more serious.

“It was a shock to me because I was just playing and having fun,” Visanthe reflects. “I think that’s when you really prosper because you put your heart into it. And you like what you’re doing. All of the ins and outs are already there. All of the prerequisites are there because your heart is there. I was always in the weight room and working out and preparing my body. I am glad I had the teammates around me to help prepare me because we all had that fire.”

After the countless hours of training for the NFL combine and the traveling along with the struggle of maintaining a healthy balance of school and football, the fate of Visanthe’s professional career was in the hands of general managers and recommendations from the coaches and scouts whose hearts he was playing to win over. 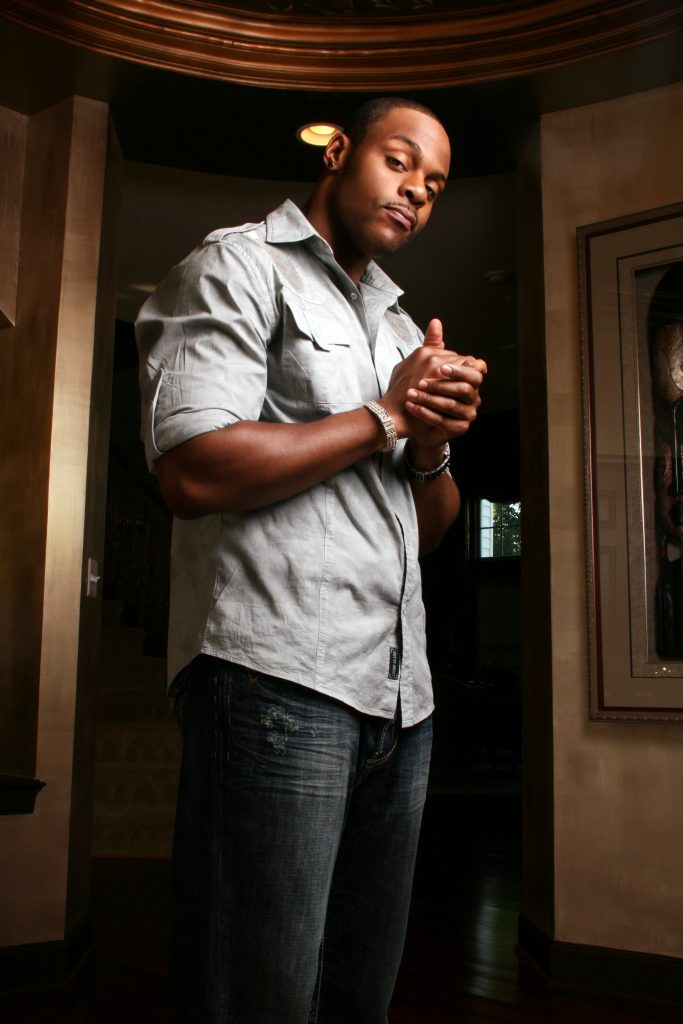 The night of the draft, Visanthe’s Maryland home was shared with 20-30 of closest friends and family as they anticipated every approach of the NFL Draft podium wondering if his name would be called. Finally, in the third round, he received a phone call from the Dallas Cowboys who told him that he was the next pick from them. Yet, that pick went to Jason Whitten who was still ironically in the pickings. The Philadelphia Eagles took on the powerhouse TE LJ Smith. After a few moments, the phone rang again. It was the New York Giants. Unbeknownst to him, they had been watching him and his development. So after hours upon days of sitting on pins and needles before and during the draft, Visanthe decided it was time to share the news with the room.

“I held the speaker of the phone and I said “I’m a New York Giant” and they went crazy,” Visanthe says with a smile from ear to ear. “I had to run out of the room. To explain it in words…relief, mesmerized, unbelievable, surreal, and an out of body experience. That feeling is still with me right now in so many ways. You always want to recreate that feeling somehow. But, one thing about me is that I don’t linger around a potential situation too long. I get into it to make sure that the situation that I’m in gets my full attention.”

After a few seasons with the Giants, Visanthe was a free agent. He had an amazing few years as a backup to Jeremy Shockey. Beginning to come into his own on the field and developing a level of comfort, caught the attention of Minnesota Vikings coach Brad Childress. Childress recruited him and eventually arranged him to have his talents relocated under his direction in Minnesota. This was a hell of an adjustment for Visanthe. He wasn’t used to playing the lead role for an organization as well as becoming a pass-catching tight end. It was no surprise that he struggled and his mindset was completely off. All of this would have remained the same had it not been for his exit interview with Childress.

“I started blaming everybody else,” Visanthe begins to explain. “But I said, ‘hey coach but do you have my back’ (because I was feeling like I was by myself). He told me yeah. I started putting in 110 percent. I was catching balls and doing extra routes and drills. I started practicing my craft. Once I started seeing it on the field, it clicked in my head. It’s almost like you go crazy a little bit. I yearned to get that feeling and the results. I loved that transition. I started running with it. And I still don’t feel that I’m to my fullest potential yet. Nowhere near it. You can look and say ‘wow, how did he make that catch’ but for me, that’s something that I’m practicing every day.”

Saying that hard work has paid off for Visanthe is an understatement. What we see as fans of the NFL as well as other professional sports are the games. We tend to think that the League consists of just games and practices. That’s simply not the case, there are team meetings, position meetings, training, practices, tape reviews, playbook reviews, public appearances, interviews, and if you’re lucky, endorsement shootings, meetings and appearances, on top of the family time, personal time, and typical fan time. Needless to say, the hardest part of being in the NFL for Visanthe is time on top of the expectations.

“A lot of lives are depending on what you do whether you’re performing or not,” Visanthe explains. “It’s stressful.  No matter what a player says, he knows that he’s not only representing himself, it’s his family, wife, brother, the organization, fans, the NFL. You want to represent yourself the best way possible. You want to be a true competitor.  There are a lot of people out there that just want to get paid. But, usually, those people just fall off.”

Knowing that he will never fall into the fall off category, Visanthe cringes at the thought of being injured and not playing football anymore. So much to the point that when the question was asked, he began looking for wood to know on to try to fend off the superstition that could come with the near mention of the word in which we shall not repeat. Nonetheless, there is a backup plan. Delving into a few franchising opportunities and what he calls “Safe business with safe returns”, the self-proclaimed food connoisseur plans to turn what has been a season of recording, into a possible full-time career. Television and food.

Okay, don’t squint your eyes so much. He’s not going to be in the kitchen cooking, screaming “BAM” and pouring white wine into all of his dishes. The idea is to go into Broadcast Journalism in some form. He is far from shy when it comes to the cameras, which his show ‘What’s Eating Visanthe’ showed this season. Every week, he took cameras and Minnesota’s KARE 11 Sports Journalist Dave Schwartz to a different restaurant where they ate some of Visanthe’s favorite foods. None of those foods can beat the delicious taste of the food that his mother cooks. As I sat in front of my bowl of food with sweat rolling off of my forehead, He begins to talk about the African dish that I was devouring. Which may be one of the reasons that he has been considering opening a Liberian Restaurant. That’s right, Visanthe Shiancoe is African.

“My mom is Liberian and my dad is from Ghana but lived in Liberia. People laugh when I say this. My tribe in Liberia is the Mandingo tribe. No Pun Intended,” he says laughing referencing to his live locker room exposure a little while back. “Tall, broad shoulders, slim, fairly muscular. Visanthe isn’t an African name, it’s Asian Indian. My mom promised the wife of the Indian Ambassador of Liberia to name her first son after him after he passed. She loved that man. They were all really good friends.  It’s pronounced Vi-san-th, but the Indians say Vi-san-tay. Visanthe Odai Shiancoe. My mom says Vi-san-th.”

There are few people in the world that we live that have the ability and opportunity to do what Visanthe Shiancoe is blessed to do day in and day out. The chances of becoming a professional athlete are lower than the chances of becoming a heart surgeon. And he realizes that. It’s the reason that he doesn’t take his career for granted. This is why he trains as hard as he does, and give back to those that want to follow in his footsteps. It’s the reason that he travels from Maryland to Minnesota throughout the year to work, compete, and entertain. However, he is smart enough to keep his focus short as well as long-term. Goals have steps, not elevators.

“All I can do is control what I can,” Visanthe says confidently. “Of Course God is number one. If you don’t feel like you are the best at what you do, you can’t bust through to that next level that you’re trying to get to. You have to be able to fight through the turbulence to get to the cruise control. First, you have to conquer the level you’re at. If you’re worrying about level 10 and you’re on level 2, you’re going to hurt yourself. You have to conquer and then raise the bar and repeat. You can’t bask in the glory. You’ll get left behind.”

To watch episodes of ‘What’s Eating Visanthe’ visit his site at www.visantheshiancoe.com