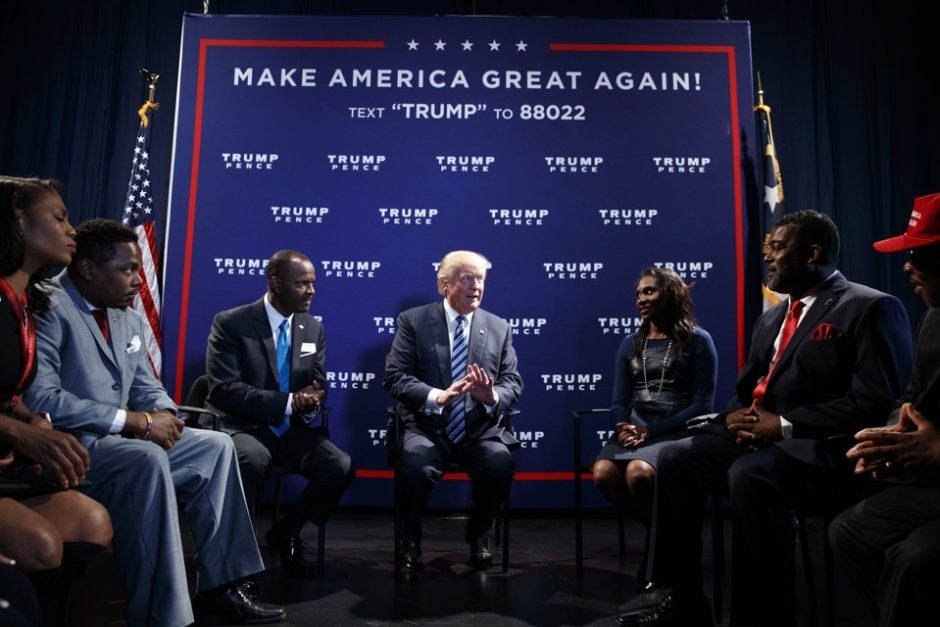 For centuries, Black America has struggled to identify the leaders of our shared community. But like Donald Trump has shown [and the history of America has proven] white people in power have NO PROBLEM whatsoever controlling the identity of Blacks in this country, IF they can. This is quite unsettling, but to be honest, It’s actually a quite brilliant strategy that they’ve employed since the arrival of the first Africans in America. In this article, I’d like to focus on what defines a Leader in Black America and why many African Americans are voicing their displeasure with Black celebrities who have publicly announced their support of Donald Trump. These persons have even gone as far as to persuade others to “give him a chance” which has incited much anger and questioning about who really are the leaders in our community.

First, let’s take a look at what qualifications are needed to determine leadership in Black America? So far, Kanye West, Jim Brown, Martin Luther King III, Ray Lewis and Steve Harvey have met with Donald Trump and pretty much have all given him a positive response following the exchange. I’d be remised if I didn’t immediately contend with the notion that, just because these individuals are entertainers, athletes and politicians that they are qualified to be LEADERS of the Black community. Money, fame and status don’t make you a leader; it may give you status, but that doesn’t account for leadership. So, what is a leader? A leader is someone who can motivate others to get things done and to believe in themselves. Contrary to popular belief, Leaders are developed, not born. So that means anyone can be a leader if they exemplify the proper characteristics. Furthermore, the most effective Leaders don’t lead by force, compulsion or fear, they make people feel good about themselves and their abilities; this way they are able to develop other leaders. So my issue is, why are these people being called “Black leaders?” Who bestowed that title upon them?

Let’s explore a few components about leadership that are germane to this discussion. First, in order to be appointed a leader in Black America, the community at large needs to be able to accept your values and beliefs and that selection needs to come from within the community that you serve. White America doesn’t get to tell us who our leaders are and who will speak for us. One then may ask, why is Donald Trump reaching out to certain individuals that HE thinks are our leaders? Why are hey even responding to him? To answer that, It is apparent from a historical perspective, that Blacks in America have had problems defining and identifying our own leaders. WEB DuBois, Marcus Garvey, Malcolm X, Huey P. Newton, Martin Luther King Jr., Jessie Jackson, Al Sharpton and Barack Obama to name a few have all been characterized at some point as Leaders of Black America. It is also true that they have all been received by some and rejected by others who challenged their leadership for whatever reason. But the difference is, they aren’t entertainers or athletes. They stood for a purpose and that purpose was uniting the Black community and fighting for civil rights; some peacefully, others by force.

The danger is, if we cannot agree on or don’t identify our own leaders, white America has no problem identifying them for us, just as Donald Trump has done. Since when do entertainers and athletes account for leaders in social justice and Political reform? Let’s be clear, from the defining Negro era, to being colored; to being Black (and proud) and now “African American,” there is one thing that can be upheld and that is, whether we accept it or not, African Americans all have a shared experience. The historical institution of slavery connects us to each other in this country, so if our past is connected our future must be so as well. Even with that knowledge, many things stratify us on the basis of political, socio-economic and even cultural differences that make us more liberal or conservative depending on where one lives geographically.

While some entertainers, athletes and artists have fame, money, celebrity status and support Donald Trump, that certainly doesn’t make them a leader of the Black community. That doesn’t mean they speak for all of Black America. We’ve seen all over that several other Black celebrities have taken a stand, refusing to perform at the Trump inauguration for reasons that are clear; Donald Trump is a mysogonist, a racist and has never been concerned with the issues that Black Americans face.

Let’s be careful not to acquiesce to the divide and conquer tactics of Donald Trump at the expense of our own freedom. If change is going to come in our communities, economically, socially and politically, it needs to happen with US. We don’t need to be rescued, patronized or fed a bunch of false dreams to make it happen. To our celebrities, athletes and entertainers; don’t sell out. Don’t take the BAIT. I’ll conclude by saying this, Black America has to come together and define our leadership and our values. This is the basis and the beginning of many further discussions

Brian A. Bingham, “Son of Promise”

Brian is known to be a relationship counselor, a former radio personality for an internationally syndicated network, and enjoys traveling, cooking and Golden State Warriors basketball. Professionally, Brian works in corrections. Brian is the founder of "Son of Promise," a mentoring and advocacy organization. He believes that every young man, no matter what their life trajectory is, has access to a promising future with the proper guidance and the presence of positive male influence. Son of Promise seeks to model and teach young men the tenets of manhood, so they may be successful in each their endeavors and contribute to a more equitable society.