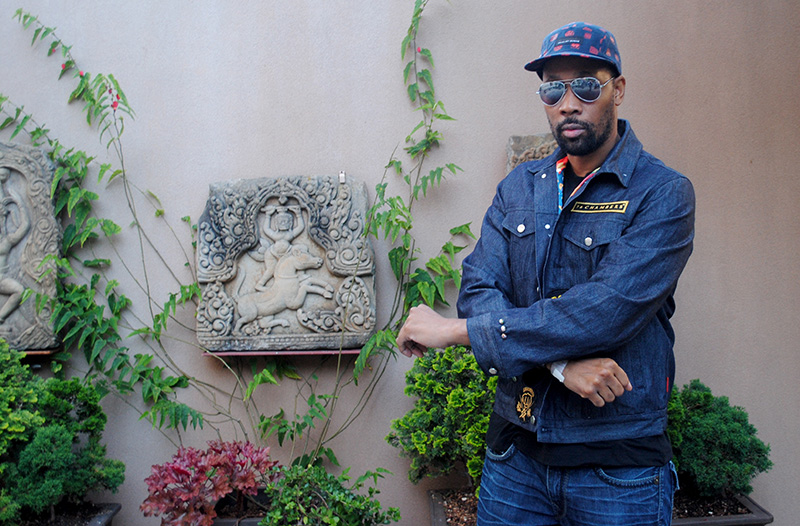 As the leader of the legendary multi-platinum selling rap group, The Wu-Tang Clan, RZA, or Bobby, as he is known to close friends and colleagues, had a particular way of putting beats to razor-sharp lyrics that made you feel part of a song’s creative process. Fans feel RZA’s music, both from Wu-Tang and his solo and collaborative efforts, on a cellular level.

An urban-bred intellectual who expresses through a mic or camera lens, RZA is considered prophetic to his community and perhaps a unicorn to mainstream culture. With a penchant for Eastern philosophy as is evident in the name Wu-Tang Clan and lyrical nods to Shaolin Kung Fu, RZA shared, “One thing I’m looking forward to doing in the near future… I’ve never been to India, and I have to check that one-off,” referring to the top item on his bucket list. I recommended he connect with Indian author and yogi, Jaggi Vasudev, also known as Sadhguru when he makes the trip. RZA is so well-read and well-versed, it felt novel giving him someone and something beyond his scope to Google.

The historically disastrous storm broke through poorly constructed levees, flooding out the city’s most vulnerable residents, and leaving them with little hope or help from FEMA. Much like our current pandemic, Katrina shone a light on shameful racial and economic inequities. Though the film’s story is a sobering one and the lead character’s decisions are morally ambiguous, he insists the film portrays “a story of redemption,” with parallels to his own life.

“No one [in this film] is completely bad, and no one is completely good. They were all flawed. It exemplified their humanity and it comes down to a choice. The theme of [Cut Throat City] examines the importance of dreams against a backdrop of survival.”

Reflecting on his early days in the spotlight, RZA denounces some of his youthful bravadoes as he recites a trademark Wu-Tang lyric for me, “Wu-Tang Clan ain’t nuthing ta fuck wit,” and laughs out loud at an ego-driven existence that took center stage early on. It’s now tempered, he says, by a need to serve something greater than himself. Throughout our conversation, RZA’s words are prophetic, culturally provocative, and spiritually centered. We talked about a life lived outside the matrix of material trappings; a topic initiated by him and encouraged by me.

Allison Kugel: Do you believe anything is possible, or that circumstances dictate our destiny?

RZA: Wow, that’s a strong question. I think that persistence overcomes resistance. Therefore, every possibility is actually expressed in our children’s wishes. The things we wish for as young minds and things we thrive in our spirits for, I think they make that which seems impossible, possible. The whole Greek study of Icarus and the idea of men flying… that seems like it would be magic or some other thing. We fly every day now in many different variations of flight, for example, flights that leave our basic atmosphere and travel across the whole world. So, what seems impossible, I think positivity and possibilities are probably boundless.

RZA: Poverty and wealth are two very different circumstances, but those are physical circumstances. I think we have to be conscious to not have the physical circumstance truly shake our spiritual and our personality. I grew up in poverty, but I was never unhappy. Joy and love were in our household. My mother was a single mother, but joy and love made up for the lack of food and shelter. The point I make in saying that is, of course, in a capitalist society our freedoms are compartmentalized. Therefore, you could be physically free and not spiritually free. You can be spiritually and physically free, and not economically free.  Since economic freedom is a requirement for proper food, clothing, and shelter, it can become something that transcends the physical, and bleeds into the spiritual. If life was simple, everything we want is already provided for us by the planet. There is nothing on this planet that we eat, ingest, take, dance with, fly with, that is not from the planet. It’s just that when you are dealing with certain [economic] systems, they take control over us. Even in some religious traditions, they have ways of controlling what is naturally ours. I’m out here in New Jersey in the woods right now, and I just saw some deer walk by. A whole family [of deer] eating whatever they ate and they keep walking.

Allison Kugel: I had a similar moment when I looked at a family of birds outside my house, and they don’t need anything. They’ve figured all of it out for free, on their own.

RZA: Yes! There is a beautiful verse in the Holy Quran that speaks on that. I’ll paraphrase it. It says something like, “The birds and the bees are taking care of every day with no worries. Do you think Allah would do less for man, his greatest creation?” Everything they have access to, we have access to. It’s that we grabbed control over it and denied access to certain people. That’s playing into the theme of my film (RZA’s latest directorial effort, Cut Throat City, streaming on Netflix).

Allison Kugel: Yup! That’s why I’m asking about it…

RZA: One of the biggest issues of the situation in this film that I hope the audience catches is that Blink (played by Shameik Moore) goes in with his wife (played by Kat Graham) and child for help from FEMA and they ask, “What is your salary?”  She says, “About $32,000.” Not a bad salary and not a great salary…

Allison Kugel: It’s a hard salary. It’s a salary that would be very challenging to raise a family on. Would you agree?

RZA: Yes, I would agree. And within that salary, she’s paying a third of that in taxes. Her tax money is paid into a system to protect her when the time comes that you need the protection. Now here it is, I’m in need of what I paid into and I’m being denied because of my community or because of my race. That is the equation we overlook in our capitalist society. The money that they spend every year is not their money, it’s our money that they are controlling.