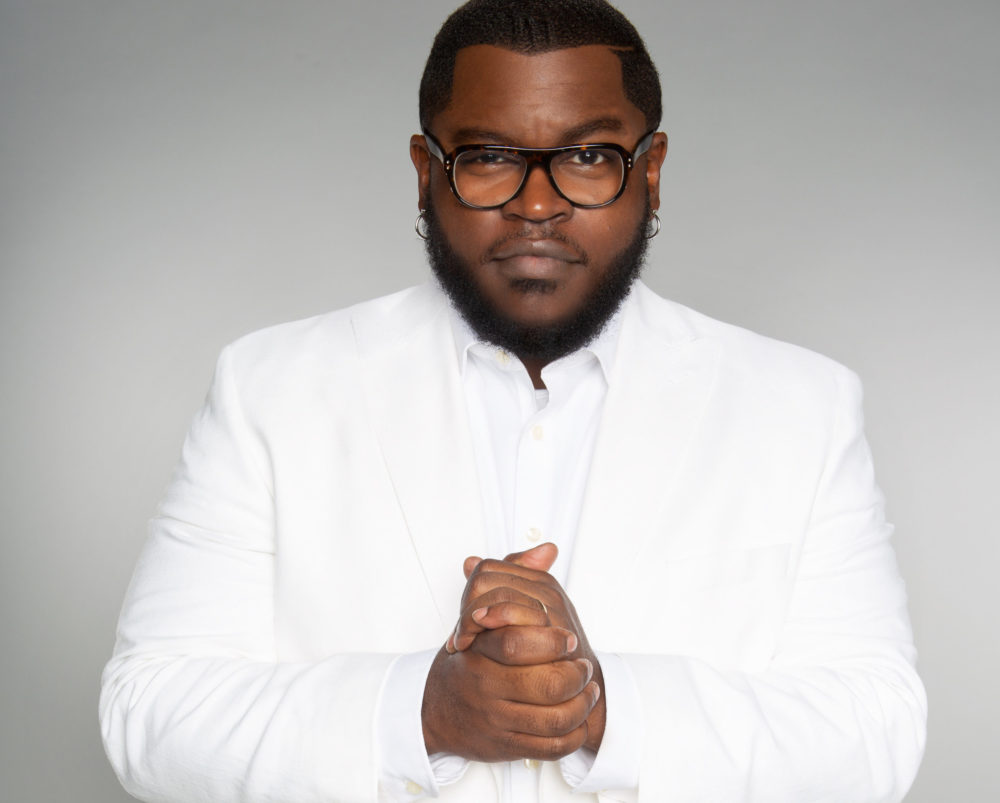 “My college roommate asked me to cut his hair one day,” renowned hair stylist and Image Expert, Tim Johnson reminiscences of how he got his start in the hair industry. “I was like…I don’t know anything about cutting hair,’” Tim Johnson laughs. “My college roommate said, Tim, my mom put a pair of clippers in my bag and told me either I cut my own hair, or I get somebody else to cut it because she’s not paying for haircuts.’

“‘Okay. I’m gonna’ do it.’” Tim said to his friend. “You know, I figured since I went to the barbershop every week, cutting hair didn’t look that hard. It just had to be smooth. But what did I know?!  So, I went ahead and cut my roommate’s hair and I jacked him up!” laughs Tim.  “But my friend came back in two weeks asking me to cut his hair again.’ He wore a baseball cap for those two weeks though.”  My roommate said, ‘Man, I’m gonna make you my barber.’ But I was like, ‘Man! Either you’re crazy or you love misery.’

“But I cut his hair again… and (this time) I noticed I did it better,” Tim reveals.  “And because I kept going to the barbershop (to get my hair cut), I could see what I had done wrong with my roommate’s hair. So, eventually over I got better. And the next thing you know… my college friends are asking me to cut their hair! I started cutting the basketball team, then and the football team, and soon, everybody was coming to my room to get their hair cut!”

Tim Johnson is a native of Raleigh, North Carolina, and is able to sing laps around just about anyone who steps into his realm. He attended Eastern Carolina University in Charlotte, North Carolina to study music. Like most music majors, he found that music theory was a prerequisite for singing his way to a degree and he didn’t have that. So, while failing out of college and having a 0.83 GPA placed him on academic probation, he was then faced with telling his mother what was really going on. She was an IBM employee who paid for his tuition out of pocket. Needless to say, she wasn’t going to be happy.

Before Tim was able to build the courage to have that conversation, he spoke to his friend and former 8th-grade bully about what to do. While cutting his hair, Tim began telling him about his dilemma. Tim had a plan to go to barber school. He was beginning to enjoy the trade, had a list of clients, and was ultimately failing out of college. The issue he ran into is that there were only two schools in the area to attend. One was in town with a year and a half waitlist. The other was an hour and a half away. His friend asked a question that would ultimately change Tim’s life. He asked, “Why don’t you just go to cosmetology school?” The question wasn’t an easy answer for Tim. He didn’t want to be seen as “gay” for doing women’s hair.

“I never knew about the money,” explains Tim. “All I knew is that I was able to cut hair and it was fun.” he reveals. “Women, my female friends, and other girls would always ask me to cut their hair and I wouldn’t do it. I just didn’t want the negativity with it,” he says. “I was raised by a single parent and grew up around all my female cousins. So, I already knew what it was like to deal with drama. Then, to have people making up stuff and accusing me of this or that. I just didn’t want to go through that.”

Tim spent a lot of time turning down the advice of his 19-year-old friend who’d been doing hair since he was 14 and was still trying to figure out how to break this news to his mom. One night while Tim was preparing to go hang out with a group of his close friends. While getting ready, his friend asked Tim to come up to the room because he wanted to show him something. When He came to the room, this same friend threw Tim a set of keys and asked him to grab a box out of the closet behind some meticulously folded sweaters. Tim went to grab the safe—you know the kind that you open from the top— there were actually four (4) total. Tim threw them on the bed as he was directed.

“I opened up the first one and it popped open,” Tim explains as if he is still in shock. “Inside of this safe were freshly ironed bands of hundreds, fifties, tens, and twenties. All of the boxes were filled with money. It was so much! I don’t think I’d ever seen that much money in my life! You know, during this time we were making $3.35 an hour. It looked like somebody had robbed a bank or something. And I said to my friend: ‘‘Where did you get this money?’

The next day, Tim and his friend developed a plan for him…. step one was speaking to his mother. Fearing his mother’s response about his mom hearing about his academic probation and cosmetology school, Tim asked his friend to go with him. “If I’m going to not only tell my mom that I am failing out of college, but I’ll also be dropping out to go to cosmetology school, you’re going to go with me,” Tim laughs.

Tim’s friend was the baddest hairstylist in the area. He did all of the women’s hair in the community including Tim’s mother. If anyone could help this sound like a good idea, it would be him. Tim’s mom already knew that he was cutting hair and had numerous clients from her visits to his school and how often he was coming home to cut hair. But this wasn’t college. She was a corporate woman, and this wasn’t going to be an easy sell alone.

After a few choice words, and eventually her blessing, Tim was off to cosmetology school with one rule, His friend was going to teach him everything that he knew but Tim had to go to school every day as if he knew nothing and learn the technical fundamentals. Nine and a half months later, Tim graduated from cosmetology school, and only a week out of school, he was BOOKED. The success was so sudden that this terrified Tim.

“When you’re doing something that you’ve never done before, and you’re experiencing massive success, there can still be fear,” Tim explains. “Entrepreneurship is the willingness to ignore the fear and take the risk anyway. And when I took that risk. Like I had nothing else. I was all in and the results were coming in and it was coming in fast!” Tim said. “My phone was ringing off of the hook, and people were telling their friends and their friends would come not knowing that I only knew how to do two haircuts.”

“Then my friend, who’d become my mentor, told me, you’ll always make money off of these cuts,” Tim recounts. He said, “Hair can only be cut one of two ways, It’s either up or down.  And as long as you get that concept together, it’s going to click for you. You’ll forever make money.’  I learned that, and it became part of my system,” Tim reflects. “So, the money started coming in and I didn’t even know that I was considered an entrepreneur. And I’m telling you just as brutally honest as I can; I didn’t even know that I was an entrepreneur.”

Tim went from making $80-$125 a week to $1,500.00-1,800.00 a week by styling his female clientele. He was 19 years old clearing $60,000 in his first year. He’d never made that much money but had no idea how to manage money and success. He’d never had this level of power. He was an entrepreneur who didn’t know much about how to run a business, pay taxes, or the next steps to take. But He had faith in God and was gifted at building relationships that have yielded great rewards.

Early in Tim’s faith journey, he’d stand on a Bible to demonstrate that he was literally standing on the Word. But since then, having grown in wisdom, knowledge and good understanding he uses his words to declare what it is he wants to see. He does this through positive affirmations, speaking his life into existence. He was doing this before he truly understood the power of doing so. He was determined that he would not go back to his mother and tell her that he’d failed and wasted her money again. He learned the importance of writing out his visions and goals. So, he’d write about being booked, the type of salon he’d have, how it would be designed, and ultimately what his clientele would look like. He called what wasn’t at that time to be as if it already existed until it really did.

“My mother was a diva,” Tim laughs. “So, the example of the type of clients I wanted was much like my mother. I wanted high-end women. My dream client was the professional woman who took care of business. She’d come into the salon one way and leave out with her hair shaking like a TV actress in a commercial,” Tim smiles.  “Everything word I spoke began to bloom; it came to fruition. There was nothing that I believed that I didn’t get.”

To read more about Tim’s story, find out about how his career advanced, and how he became one of the most sought out hair stylists and image experts in the industry, read the full article in the upcoming July issue of SUAVV Magazine.