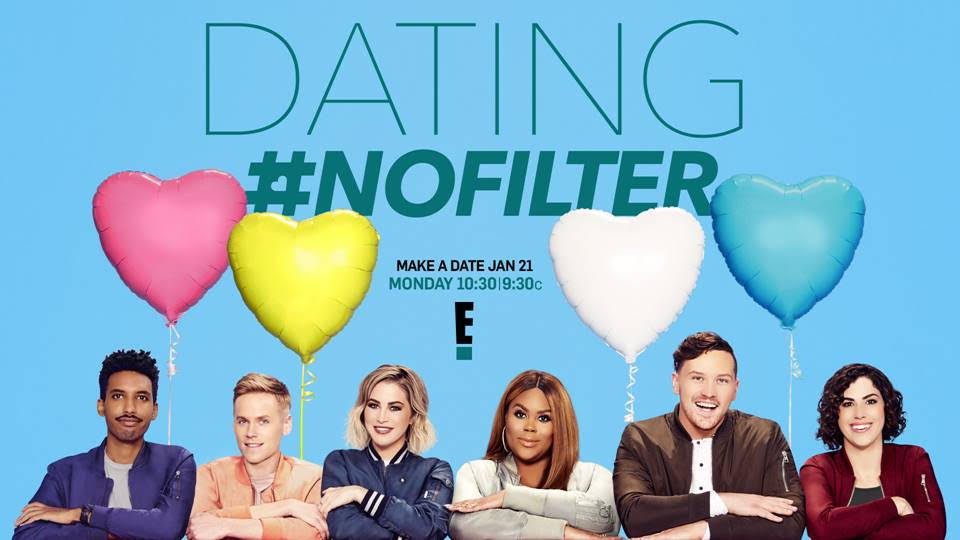 E! expands its original nightly programming line-up with a 20-episode order of the new unscripted comedy blind dating series, “Dating #NoFilter,” to air Monday through Thursday starting Monday, January 21st at 10:30 pm EST/PST.  From Lime Pictures and All3Media America, “Dating #NoFilter” is a fresh and hilariously honest take on the modern dating scene for the socially savvy, right-swiping generation. In each buzzy half-hour episode, three pairs of outspoken comedians will serve up play-by-play as they follow real singles on the most outrageous, intimate, and surprising first dates.  Throughout the blind dates, the comedians will offer their candid and unique point of views as they weigh in on every accidental love story pulling at viewers’ heartstrings and the “OMG-no!” cringe-worthy moments, with real, unfiltered and clever commentary.

“Dating in a hashtag world can provide humorous, sometimes outrageous situations, and our comics are ready to bring it,” said Amy Introcaso-Davis, EVP Development and Production, E!.  “Armed with wine, popcorn, and astute observations, they will offer hilarious commentary as our daters navigate the thrills and awkward drama in their quest for love.”

Ben Bizuneh is a writer, actor, and comedian who made his television stand-up debut on Viceland’s “Flophouse” and recently starred opposite Beth Behrs in the Lee Daniels FOX pilot, “Culture Clash.”  Bizuneh has created several originals for Comedy Central Digital including Demitrinox’ “Antidepressant for Black Folk” and “How To Be Broke,” which recently wrapped its second season. Ben wrote on staff for “Jimmy Kimmel Live!” and previously consulted on TruTV’s “Billy on the Street.”

Cara Connors is an out and proud stand-up comedian on the rise. She is the creator, writer, and star of two original digital series for CBC Comedy, “Cara Cooks” and “Every BLANK Ever,” and is a graduate of the Second City Conservatory in Toronto.  Other credits include JFL42, Hot Tub with Kurt and Kristen, Winnipeg Comedy Festival, Sirius XM Top Comic, CTV, Tim Sim’s Encouragement Award, Chicago Funny Women’s Festival, She Devil Comedy Contest NYC, Toronto Sketchfest and CBC’s Laugh Out Loud.

Rocky Dale Davis is a comedian whose first comedy special debuted this past October on EPIX as part of the new stand-up series, “Unprotected Sets,” produced by Wanda Sykes.  Rocky is a 2018 JFL New Face who has appeared on Kevin Hart’s “Hart of the City” comedy series on Comedy Central and on MTV’s “Greatest Party Stories Ever.” In 2017, Rocky was a finalist at the Laughing Skull Festival and a “Comic to Watch” at Conaco’s New York Comedy Festival. Rocky has toured extensively and is a regular at The Comedy Cellar both in New York and in Las Vegas, where he is based.

Kelsey Darragh is a YouTuber, actress, and comedian who captured America’s attention as a Buzzfeed fan favorite with her popular segment, “Married vs. Single.”  Darragh has appeared in a number of other skits on BuzzFeed’s channels including “If Netflix And Chill Were Honest,” “When You’re A Girl Who Loves Food,” and “When Drunk Food Is The Best Part of Going Out.”  Darragh is also the star of the comedy web series, “Harder Than It Looks.”

Ben Evans is a comedian and actor currently living in Los Angeles.  He has previously appeared on season two of Netflix’ “Queer Eye,” comedy game-show “Funny You Should Ask,” Yahoo Screen’s “Plugged In,” and a series of independent films that you shouldn’t watch if your grandmother is in the room.  He spends most of his time hoping to one day be known more for his comedic ability than for what he’s told is an uncanny resemblance to the former baseball player, Derek Jeter.

Zach Noe Towers is a stand-up comedian, actor, and writer who has opened for “RuPaul’s Drag Race” winner Bob the Drag Queen, headlined Pride events all over North America, and was one of the hosts and writers for the popular digital series “The Elite Daily Show” on Verizon’s Go90 Network.

Nina Parker is the co-host of E!’s “Nightly Pop” and an E! News correspondent who can be seen appearing on E!’s “Daily Pop,” “E! News,” “Live From E!” on Facebook, and “E! Live from the Red Carpet.”  Parker began her career working at a local NBC news affiliate in San Francisco before moving to Los Angeles where she assisted with the growth of TMZ, serving as talent, producer, and weekend manager of the website turned television show. Nina has served as an entertainment news correspondent for “The Insider” on CBS, and as the host of the reunion shows for VH1’s top-rated franchise, “Love and Hip Hop.” Parker has made numerous television appearances as a pop culture expert on popular shows such as “The Wendy Williams” show and “The Talk,” and as a contributor and fill-in host for “Access Live” on NBC.