Two years ago, a tall skinny kid popped up on the movie screen. It was a small role, and many may not have noticed that he was there. Playing the role of Dr. Dre’s younger brother in the highly acclaimed movie Straight Outta Compton, Keith Powers was on the launch pad of his career. With new projects on the table, one of the new faces of the Young Black Hollywood movement and is making sure that his face nor his name will ever be looked over in the future. Though his newfound success and celebrity has not hit him, the Sacramento, California native is acutely aware that he hasn’t enjoyed the moment. But it wasn’t a smooth start for the new actor. In fact, he thought he would be a football player. 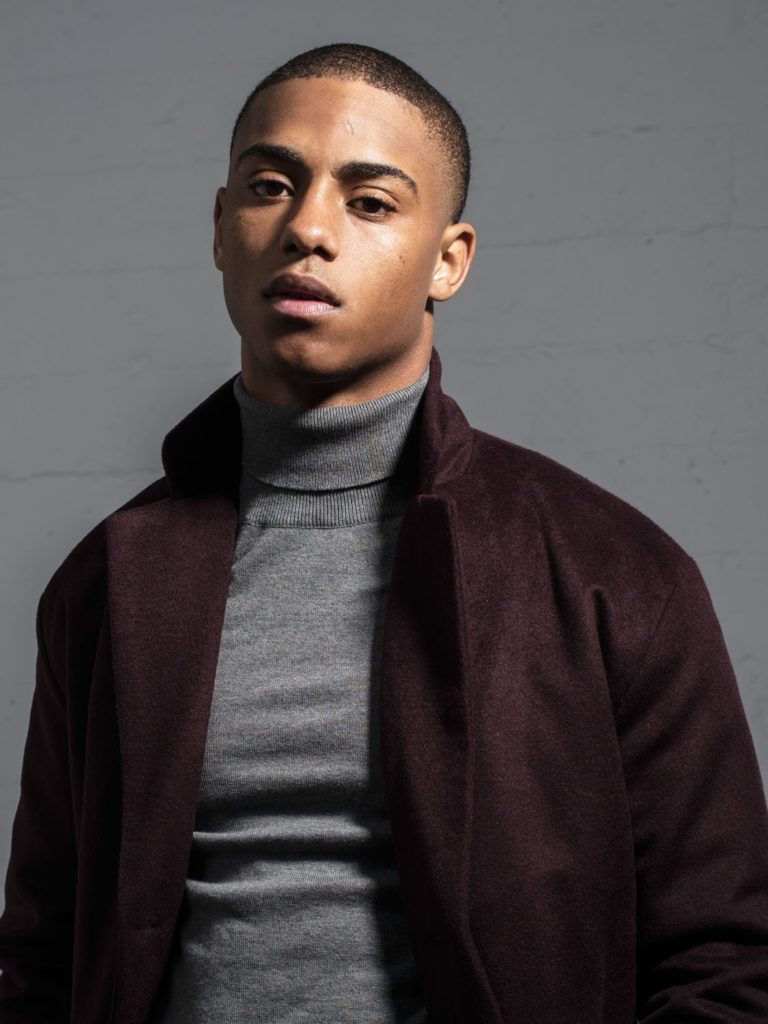 “I played football from 7-17,” Keith explains during our early morning phone interview. He is in his movie trailer and sounds like he is just as half asleep as I am. “Straight out of high school, I was in talks of going to go to UNLV. I missed out on my clearinghouse because I was soo sneaky during my senior year of high school. I hated math so I would try to find ways to get out of the math class. Ultimately, they wanted me to red-shirt for a year. I said, “there’s no way I’m going to sit out my freshman year in Sacramento.” I was offered a contract to model in LA, and I had to make a choice. So, I picked modeling, and I’m glad I did. At first, I was only modeling and didn’t know what I was going to do. I knew that I wasn’t going to be able to model forever and was tired of asking myself what next. 2 years after modeling, I started acting and fell in love with it. I thank God for the gift (of acting) because I haven’t felt passionate about something like this since I played football. It was a leap of faith, and I was ready to jump.”

Keith was a fresh face in a city of new faces, and everyone wants the same things for different reasons. Some are “actors” because they want celebrity. Some love the craft, some like the pay, and some think it may be a fun thing to do. With that much congestion in an industry, it can be challenging to stay focused and to stay driven. Luckily for Keith, he was a student at one of the more sought after acting programs in the city, Dustin Felder’s Acting School.

“My acting coach, Dustin, is great,” Keith says with an inflection of gratitude in his voice. “He’s not only my coach, but he’s my mentor. Dustin tells me all of the time that there’s no surprise that I book things. He always tells me that he’s proud of me. Dustin reminds me to be patient and that I’m doing good. When I was first trying to book jobs, I didn’t do well I was having a hard time, and he talked me out of wanting to quit. That’s huge.”

Young actors lose a lot of their childhood and typical childhood experiences because of work. As far as Keith believes, he was fortunate because he was able to be a kid and ride bikes, have crushes, play sports…all of those things that are good about childhood. Keith can look back at those experiences and use them in his roles. He attended different schools that were predominately black as well as culturally diverse. Therefore, when the Yahoo series Sin City, a show about a tech billionaire who decides to buy a basketball team, Keith fell right into place.

“The owner is not the most responsible guy at all,” Keith says laughing. “He hires strippers as the cheerleaders and puts death hits on the referees. I play the all-star rookie point guard. This kid is a brat, a know it all, and spoiled, but he’s very naïve. All he knows to do is play basketball. Fast-forward and he gets injured and now has to make a life outside of basketball. I love the story because I feel like a lot of kids only look at the sport they want to play and they don’t shape their lives outside of the sport. So now you put millions of dollars in these kids hand and wonder why they make dumb (financial) decisions. All of the things that they couldn’t do when they were younger, they now can.”

When Dustin said there was never a doubt that Keith would secure work, it was on the heels of the NWA biopic that Keith landed. The new actor was nervous because of the magnitude of the movie and wasn’t sure how the public would view his performance. Little did he know, he and his coach would share a screen for the highly regarded BET hit, The New Edition Story.

Keith has grown from a kid in an acting class doubting himself, to a face that is all over television and the internet. It’s easy to say that we are proud of him. But once you met him, you will see that he is just as proud of himself. Playing the role of Ronnie DeVoe pushed Keith’s celebrity status through the roof. With his Instagram and Twitter following expanding drastically, he did all that he could to remain true to himself and to make sure that his fans continue always to come first.

“The one thing that I don’t like about social media is that I wouldn’t want to have fame from social media,” Keith says after a long pause. “Social media is a gift and a curse. It allows you to tap into a large audience at one time, but it can destroy your image if you don’t use it properly. You can lose jobs just based on your social media actions. You have bloggers that are great and have a following because they have the content. Then you have other people who are social media famous, but there’s no depth to who they are. It’s so much better to have the work to back up your social media than to have a social media following with no work to show for it. But to win on a bigger scale, you need your supporters to watch the shows and buy the movie tickets. I’m weird I don’t like calling people fans, I call them supporters. I use my social media to communicate with my supporters. I feel that if you are in this industry and you have social media, why not communicate with your supporters. I believe that our supporters are the reason that we are where we are. They support and we entertain.”