As an actor, the ultimate goal is having a really good character within an amazing storyline. Sometimes, the character is so far fetched from actual life that it is even more challenging for the actor to understand that person. Benjamin Patterson has placed himself in one of the best storylines on television today. As Noah, on the hit OWN Tv series Greenleaf, he was able to show a little range from his everyday life as a husband, father, and music artist.

It’s early afternoon and Benjamin is full of life during our phone interview. He’s riding home from the airport to see his husband and son after a long work week on the east coast. He’s telling me how fortunate he is about his shooting schedule with the show and how Oprah and the team at OWN have really taken his family into consideration. Being married for over 16 years is a wonderful thing, but, being a first-time father of a new baby boy, has been the highlight of this chapter of his life.

“It’s really wonderful,” Benjamin says with a smile that you can hear through the line. “I’m seeing all of these learning milestones and physical milestones that make my time at home very precious. It also means that everything has to be on a schedule according to HIM (laughing). It’s not like I’m going to get up at 8 and go work out. He gets up at 7 and is eating at 730. It makes me want to do more so that I can have the best for him while having the best for myself. So having a wonderful work team like OWN, is just amazing. Everything around his birth was great. I worked up until he was going to be born, then flew home for a couple of days, went back to work that next week, and was back home 2 days later.”

Filming away from your family is always hard. Add in the type of role that Benjamin is filming, one would think the stark contrast of life would be a little hard to portray. Well, only to an amateur actor. “I’m attracted to really good and creative characters,” Benjamin explains. “And as long as I am attracted to the character that I have to embody, and I stay true to that, there’s nothing that can pigeonhole me. It’s more of ‘Am I available to play that character’.

“I look at Johnny Depp and Don Cheadle as two of the actors that are soo not the same from film to film or tv show,” Benjamin explains. “So the challenge is to wipe the board clean. So you say, okay who is this person? What do they like to do? Where do they eat? How do they walk? And once you start to go off into that character and find those basics, you are able to come up with these other results and you become more comfortable with their choices. If I’m a cop, I will be the best cop I can be. If I am a hard nosed military guy or a gangster, I have to be the best at that and just leave myself at the door. So that whoever that character is, if you have to fall in love with him, you will. But if you are to hate him, I need to make sure that every part of my being is hated by you.”

And that held very true to his character of Noah Kendall on Greenleaf. To think that the morality of the church was put under the microscope would be the wrong way to view this series.

“There wasn’t a criticism of the church, but basically highlighting common events of people’s lives,” Benjamin explains. “These were power struggles that would be in the entertainment world, corporate America, or the real estate world. It’s common. It just happens to be in the backdrop of a megachurch in the south, so there is a lot of caution that people are having. However, I feel that the show is very specific in telling a really good story and also relating to many audiences through the eyes of the black church. It’s like eyes behind the curtain that you wonder what’s going on and this show says “okay let’s suppose this is going on and address it.” What makes it great is the work we are putting into the art of this.”

Acting was never the focus for Benjamin. While all of his friends were running track, he figured he would do something different. He actually thought he would continue his high school swimming championships at the Olympics as a sprint and relay swimmer throughout high school. “I swam all 4 years,” he says with pride. “I was super excited to see the Olympics. I mean when I swam there was no one that looked like me. My team, there was me and this guy Josh and Donald that were the three African-Americans on the team. Then, I lifeguarded in Oakland for 4 years. Talk about a diverse group there are a lot of guys that wouldn’t be seen as swimmers or lifeguards. “Black people don’t swim” yeah… well, we do in Oakland.” 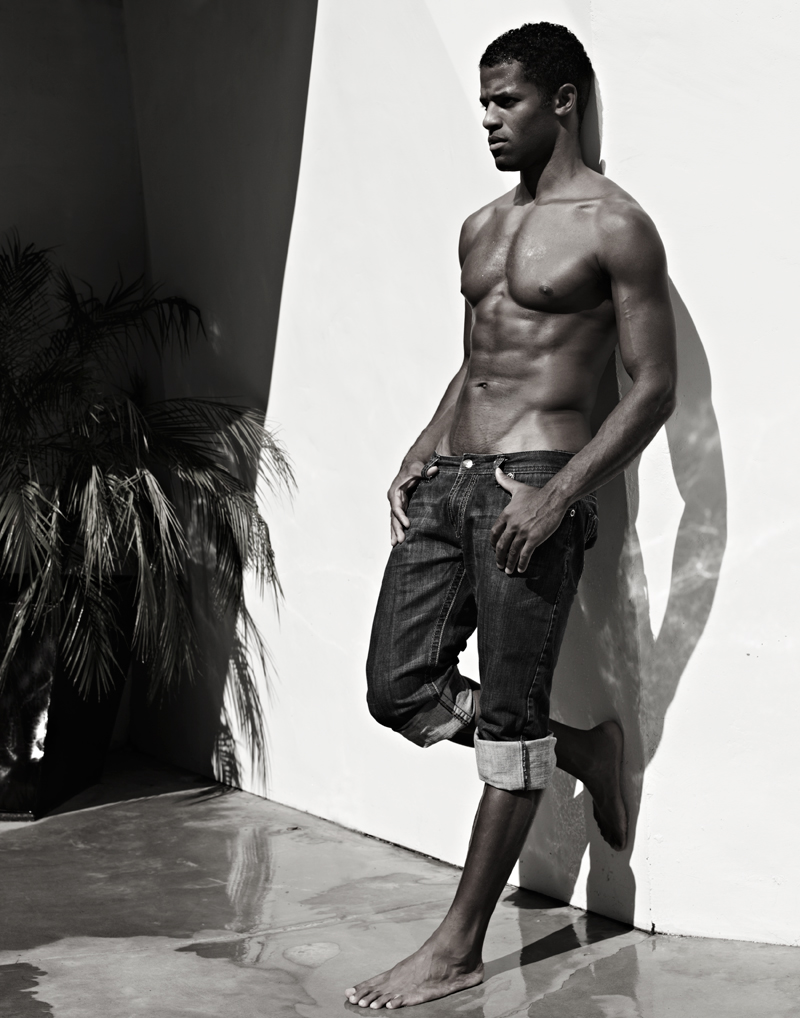 Swimming the 50m Butterfly, 50m freestyle, 200m medley, 4x100m relay, he was grooming himself to be Michael Phelps before there was a Michael Phelps. But his coach had a trick up his sleeve. Once a year, he would make Benjamin swim the longest race in the meet. “The first time I swam the 500, there was someone that finished in 10 minutes which isn’t a great time,” He says as he begins to laugh. “I finished in 35 minutes. People were dried off, changed, and in their cars, and I was still swimming. My coach used to make me swim it at least once a year and I HATED it. The sprints…. I was good, I was excited and cheering for my teammates. In the 500, I’m trying to figure out what I am going to eat once I am done. You have a lot of time to think in that race.”

The conditioning of swimming is probably the main contributor to the physique that Benjamin holds to date. While he knows where his limits lay, his concern is making sure that he can be an active father when his son is ready to get out and play. An avid skier and recent snowboarder, Benjamin looks to people like OWN president Eric Logan who is surfing at 5am just about every morning before going to work. While having such a high demand job, he admires the time that Eric gives himself every day. Benjamin devotes a good amount of his free-time to a different beat of the drum….literally.

Being a drummer for as far back as he can remember, it wasn’t a surprise when Benjamins love for music drifted into his father’s record collection. And eventually turned him into the house party DJ from 7th grade through college. If it was on vinyl, Benjamin owned it. He veers away from the 1’s and 2’s these days and sticks to his instruments (piano, bass, and electric guitar to be exact) and the love of his band, Sapphire Sky. While he still gets the urge to DJ from time to time, instead of being that old guy coming down talking about “back in my day we used to carry crates” he knows to let the “young cats” with 5000 songs on a zip drive and a laptop handle that…even if their skills are limited. Nonetheless, the memory that stands true and firm involves him, a basement, and a sacred Herbie Hancock album.

“My dad had a Marantz turntable with Chic wood on it that he got from Vietnam,” Benjamin describes. “And it was a belt drive. So it’s a magnet and there are no moving parts. I get his copy of Chameleon by Herbie Hancock. So, I’m gonna do what this DJ did at this party and I started scratching. All  I heard was him scream BEN!!!! And I got busted and a good talking to. If I would have done that on his Parliament album with Flashlight or Knee Deep… you wouldn’t have a person to interview today.”