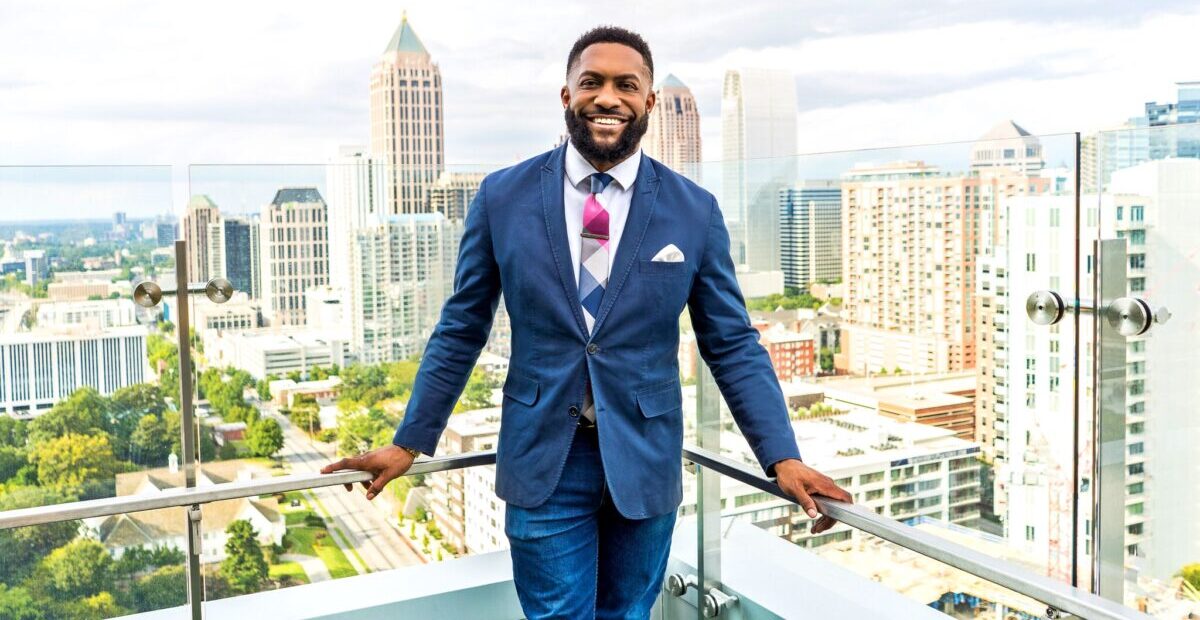 Reality tv can sometimes make or break a person’s career. In some cases, it is for the better and in others, it can take a serious turn for the worse. In the case of former Ready to Love Season 2 castmate, Jimmy Jones, reality tv has been a blessing. Granted Jimmy brought a lot to the table before joining the OWN hit show. A graduate of Florida A & M University and a member of Kappa Alpha Psi Fraternity Inc., Jones embraced his entrepreneurial spirit early on. It was this spirit combined with OWN Tv’s Ready to Love that let this Atlanta native see no shortage of customers. The self-assured number one listing agent in Atlanta has become quite popular since his appearance on Ready to Love. Yet, is he as lucky in love as he is in business?

It would seem so. Jones’s love interest on the show was, Kimber, and he still actively dates. Not only that Jimmy is experiencing a sudden influx of new female Instagram followers averaging 60-70 a day. With those sorts of numbers, I would venture to say Jimmy Jones is not just selling homes but also love.

For an inside look into the reality of love and business in Atlanta Suavv sat down with “Sell Your Home”, Jimmy Jones, for an intimate chat. We met in midtown at one of my favorite hotel lounges during lunch hour and chopped it up. Jimmy arrived in a blazer, crisp white button-up shirt, jeans, boots, and sunglasses. With a smile from ear to ear, we began joking back and forth with a little HBCU banter thanks to my attendance at Johnson C. Smith University. Then we got down to business. Let’s talk about one of the most popular occupations in Atlanta, Georgia…Real Estate.

SUAVV: How did you get into real estate?

Jimmy Jones: Everything else really was not working for me. Real estate was like a, a plan D. A, B, and C did not work. I took the GMAT to get my masters, failed it. I took the LSAT for law school, failed. I took the DAT for dental school, failed it. I took that real estate exam, knocked it out of the park. And I made a deal with God right before I went in there to take the first part of the test, I was like, God, if you allow me to pass this, I will never quit doing it. I will never quit it because I feel like one of the biggest mistakes in my life has been, I had quit things. Here is what I say, it is okay to quit somethings. I am not saying never quit. I am not a never quit guy. I think you should quit toxic relationships. I think you should quit self- hate.

I think you should quit things that are not helping you. You should quit that. Quit smoking. But in terms of different opportunities and things, I feel like if I had to see them out a little bit further out versus cutting them off where I cut them off…)

SUAVV: Going into real estate, how long did it take you to become successful as a real estate agent?

Jimmy Jones: Success is a mindset. I have been in, well over five years. It took me three years to get it, man. I took a year and focused on investment. I worked with one of the largest fastest growing black-owned and operated real estate brokerages in the world. Real estate guru, Justin Giles, great guy. He taught me everything there is to know about investing in real estate, buying the whole, buying, and flipping. Whatever you are trying to do. I know how to do it. I am an expert.

It took me a year, but it took me a year where I was also not, not really focusing in on what my sweet spot was. I was working with a lot of buyers in my first year of real estate. Working with a lot of buyers is great because you learn how to get into the mind of a buyer. Meanwhile, you also are depending upon people with challenging credit situations and money. You are basing your life upon those people promising to close on their house. Yet, those bills are still coming. We call it a pipeline in real estate and sales. Once you built that pipeline, you are not stressing every deal that comes in. Once I learned to stop stressing and just let go and let God, I stopped caring so much.

The secrets of my success have really been learning how to better communicate with my inner sphere, with my circle of friends. Because most of your referrals are going to come from your friends. And I was getting referrals. I was just getting bad referrals. I was getting the wrong referrals. But [singing} when it is time to sell your home, call Jimmy Jones… when it is time to sell your home, call Jimmy Jones, call, call, call Jimmy Jones…) I am Atlanta’s top listing agent. I defined myself and, and spoke boldly, you must speak boldly to the people. Anybody that’s ever said anything that’s left a mark has made a bold statement…) Once you start taking yourself more seriously and speaking directly to your audience, they will start listening to you and taking you more seriously. So, I had to change the message and stick with it so I was not sending them so many mixed signals. They were figuring I was a Jack of all trades, but a master of none. I want to be a master of one thing.

SUAVV: What is the hardest deal you have ever had?

SUAVV: Did she encourage you to go into real estate?

Jimmy Jones: She never really encouraged me to go into real estate. I did it on my own because, to be honest, my mom was not the greatest at real estate. My mom used to take a bunch of tests and pass, she was a paralegal, pass the whole pillar. Some people say the paralegal exam is harder than the law exam. My mom was just like a serial test taker. She loved the feeling of knowing that she beat the test. She used to challenge us to be better test-takers, but I never was. But I passed that real estate exam…)

SUAVV: You get to a point in your career where you are becoming more successful, then this show comes along. How does the show come along?

Jimmy Jones: I was on Bumble. I got on dating apps because I was tired of meeting women out here that did not have a job. They have no education; they have nothing about themselves and that were minimalizing themselves to a cash app…) I do not want to get in trouble for telling all these secrets but there was somebody with the casting that was on the app. They asked me to audition. They had reached out to me for season one through my Instagram dm’s but I was in a relationship. So, this time it was just the right time. I was single as hell…) My last breakup was really the first time that I had ever been truly single, I had no plan B. So, going on the show, I was one of the guys that genuinely was on there looking for love…)

SUAVV: Is that frustrating when you get serious about wanting that relationship and then you find other people playing the game?

Jimmy Jones: Yes. Especially when it is somebody you wished it with, it is disappointing because we could have been great…)

SUAVV: Was it challenging being vulnerable on national TV?

Jimmy Jones: It was not challenging. I thought it was going to be tough, but then when I realized that reality TV is not acting… So being real was never hard for me. It is never hard to just be yourself.

SUAVV: Did you cut up on the reunion?

Jimmy Jones: I was more of a peacemaker. I was coming like let us bring closure to this so I do not have to live with this for the rest of my life. It was how can I put a button on this thing, a nice little bow. I think anything we do can be solved through effective communication… I apologized on national television on the reunion episode. It was the apology heard round the world, literally, because it was really from my heart…)

SUAVV: The cast from season 2, are you still close now?

Jimmy Jones: You know what, after the reunion, we fell off as a group…)

SUAVV: Post-show, are you still looking for love?

SUAVV: Is it harder after the show?

Jimmy Jones: No, it is a lot easier. That is a lie. After that reunion episode, I got over 3000 new female followers. They just came in suddenly because they felt me and I was vulnerable. I took the risk. I was like maybe I should not go here, but I said you know what, let me just show my softer side. It resonated and I still get about 60-70 new female followers a day. It was at one point about 100-150…Dating after the show is been different because women treat you differently after having seen your show. It is rare to find somebody that has not seen the show, that I go out on a date with.

SUAVV: What do you want moving forward?

Jimmy Jones: What do I want? I want to be happy every day. I judge my happiness from day to day, 24 hours. I look at my money week by week and I look at my happiness day by day, 24 hours, sun up, sundown. I want to build a legacy and with the legacy comes a family again. My ex-wife remarried, and moved on with her life. I want to start a legacy, start another family of my own. I want my voice to live on. I think Tupac said it best. He was like if your voice can live on after you; that is the most powerful thing. But I guess with the power of social media now and everything, it is a little easier to go back to old text messages, voice text, and stuff that people wrote. But I just want to make an impact and I want to be rich.