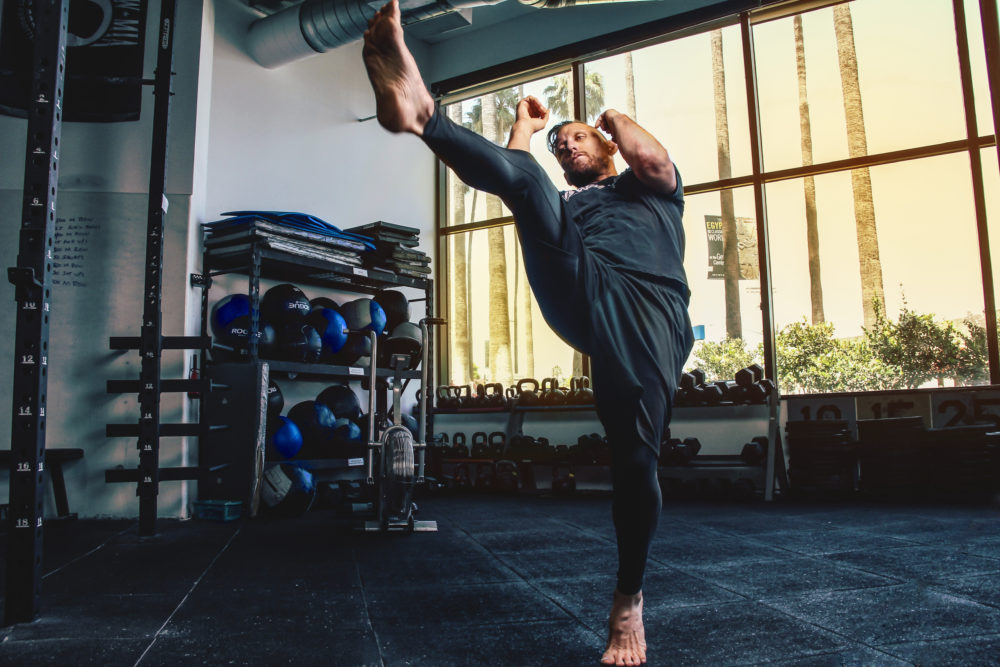 Today’s fitness atmosphere is saturated with routines like CrossFit, Kickboxing, BootCamp, and Zumba. Working out and staying active is about finding something that you enjoy doing or that you can find beneficial. With today’s climate of random acts of violence and crime, we wanted to find a way to encourage our audience to stay fit, build confidence, and learn to defend themselves and their families. When I was approached by Krav Maga Worldwide to learn more about their programs, it was perfect timing.

Krav Maga is a very skilled yet dirty street fighting style. Created after World War 2 in order to teach the newly created Israeli state to defend themselves against anti-semitic riots and violence. The objective is to end a fight as quickly as possible. Hungarian-born Israeli martial artist, Imi Lichtenfeld created the style of training which is a blend of boxing, wrestling, kickboxing, and a few martial arts disciplines. While people join a Krav Maga studio for different reasons, my trainer for the day, joined simply to protect himself.

“I really just kind of walked in the door one day,” Ross says. Ross Cascio is a small statured guy, full of personality with an intense look in his eyes. As we talk more I find that the look is just a look. He’s funny, cheerful, and patient. When he kicked the heavy bag, I knew he could be a threat when needed. “I grew up in Virginia and moved to Los Angeles in 1998. I played sports when I was younger and, I was kind of like a tough kid but I never really knew how to fight. I’m in this big city and I’m like “shit, I better learn how to fight and throw a punch and a couple of kicks so I don’t get my ass kicked.”. I started training here and then I got into the instructor training program through Krav Maga and kept doing that. So, but really man, everybody comes here for a reason. Whether it’s like mine, like I was scared of getting my ass kicked, want to lose weight, or they want to get stronger or whatever.”

As you may be figuring out, Krav Maga was never intended to be a discipline of martial art to would be applied in competition. Doing dirty things like kicking in the groin, poking in the eyes, and gauging people on the throat, if you watch the sanctioned sports fight, that’s against the rules. Krav Maga is purely about self-defense and survival. The studio has branched out into fitness programs where there are weightlifting and CrossFit. The Krav Maga team has a class where it’s all work on the heavy bag and the same striking techniques would be used in krav maga self-defense.

“When you train from a self-defense perspective, it’s different than training something like a for a fight, right?” Ross begins to explain. “It’s not like a woman who weighs 105 pounds can count on someone attacking her to be in the same weight class and of the same skill level. In that way, we don’t think about things being fair or rules applying. We get the guy that works at the grocery store and the guy that drives for uber or you know what I mean? Bartenders and some actors and so it’s a mixed bag, so a little bit different way to train. I try and tell people if you get into a fight, chances are someone’s going to get hurt. It’s either going to be you or you’re going to hurt that person and you have to be ready to kind of deal with the consequences of that either way. So we try and stress to people that, you only get into a fight that basically you can’t get out of.”

With social media and the political climate, there’s a lot more tension in our society in general. While trying not to play into that because it’s not their role, Krav Maga does their best to counter and educate. As a way to encourage training and community engagement, a couple of times a year, the studio offers anti-bullying seminars for kids and a large promotion every April for sexual assault awareness month. There are also pieces of training to the community for free or a donation based training that goes to a couple of different charities. The clientele for the studio fluctuates between gender, age, beliefs, and skill set. Nonetheless, Krav Maga is there for everybody and when people go to their studios, everyone’s on an equal level.

“I think it’s hard to put our typical client profile because it’s a pretty good mixed bag of people,” Ross Laughs. “I teach it a self-defense class and I have a guy that comes, he’s an older guy like 70-75 or something. He comes and he has trouble jog and he is still doing some stuff, but he sticks it out, man, you know, he stays there, and he does everything the best that he can. So it’s pretty cool. I mean we’re pretty much all over that map. Our sort of “ideal” customer is someone who’s living in the area, a little bit younger (so they’ll stay with us for a few years and trained for a while).”

The main aspect of training that Ross teaches his students is to make a good decision. There’s no reason to get yourself into a fight that you don’t have to get into. When the studio has its seminars they deal with a similar philosophy. You’ve probably heard the run, hide, fight, theory, right? If not, it goes a little something like this. RUN: If you can get out, get out. HIDE: If there is no exit and you can’t get out, trying to find someplace to hide. Fight: well….I’ll let Ross describe when you should PROBABLY fight.

“So a good example would be like someone pulled a gun on you and says, ‘give me your keys, give me your wallet’. If you comply, hopefully, you’ll walk away. That doesn’t assure that you’re going to be safe, but it, hopefully, makes things easier. The difference would be if they pulled out guns, said, ‘Okay, now you’re coming with me and we’re going to go somewhere.’ This probably not gonna end well and at some point, you have to figure out what you’re going to do. I tell people, I’m not a lawyer, you know what I mean? Like, if you feel that your life is in danger, you feel that you or the people that you’re with, your loved ones, their lives are in danger and it’s a situation you can’t get out of, you’ve got to go and go and go and go (he says punching and kicking and kneeing) until, until you can get out.”

To learn more about Krav Maga or find your local studio, visit: https://www.kravmaga.com/