Imagine…one day you feel drained and you’re not sure why. Exhausted, lethargic, and just want to have a lazy day. This isn’t normal for you because you are generally a very active and energetic person. This feeling goes into the next day and the next. You would probably say “okay, I’ve been pushing myself too hard. Maybe I just need to rest.” You take a few days off of work and nothing changes. You decide to go to the doctors’ office. After a few days and some test results, you find out that you are lacking bone marrow. In fact, your body is no longer producing enough blood cells. You need a bone marrow transplant and your life depends on it. What do you do?

This was the situation with Shaunise Robinson of Texas. This 3rd-grade teacher (and mother of a 4-year-old son) was completely blindsided when she found out that she has Aplastic Anemia. Of course, the healthy mom was shocked by the diagnosis. “Your bone marrow typically would create white blood cells which keep you from getting sick, red blood cells give you oxygen, finally, platelets clots your blood,” Shaunise explains as she plans for her son’s 4th birthday. “Those are the three blood cells that your body makes and my body to stopped making all of them. My diagnosis is extremely uncommon with less than 1000 people per year in the United States being diagnosed.” 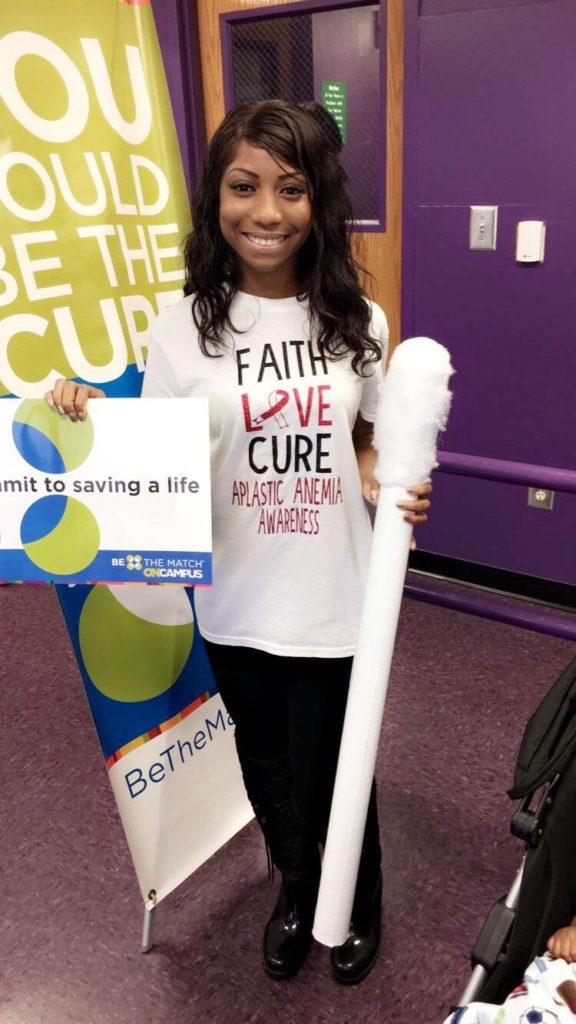 As of November 2016, Shaunise visits her doctor 3 times a week and has temporary transfusions twice a week. While it’s not ideal, it is the only thing keeping her alive. Her lack of blood cells not only affects her ability to travel, and requires her house to be under a medical grade cleaning routine, it’s placed working with her 3rd-grade class at a full halt. As we all know, a room full of sneezing 8 year-olds is the last place anyone wants to be when your immune system is on strike. Nonetheless, Shaunise is taking it all in stride and finding the silver lining in the clouds.

“I’m going to the doctor office so often, I would miss most of the (work) week,” She says with a hint of sadness. “So, I’m not able to teach, but I make videos for them and they have a really good substitute teacher and they are taking care of. I have my son, my brother, nieces and nephews, and the rest of my family. My health kind of affects everyone’s lives. The potential of me getting sick really worries them and I always have that thought in the back of my head. We have to get someone to come in to deep clean once a week just to make sure everything is really sterilized. Washing your hands often is mandatory and sometimes, I wear a mask if I go into a crowded place. I have to be much more careful about simple decisions.”

Many people have the misconception that bone marrow is a part of your blood type and your blood type has to match up with the recipient. Actually, your bone marrow is DNA based. This is one of the reasons that it is so difficult for African American patients to have donors from the national registry. Currently, the registry is only about 6% African-American making the black community the lowest represented demographic in the pool. Sadly, it’s not from a lack of wanting to help. Abby, of the Be the Match foundation, thinks the issue is merely a lack of awareness.

“We believe it’s just a matter of educating people, letting them know how to get involved, and getting the awareness out,” Abby responds. “I feel that once people realize how life-saving this is, what it would actually require of the donor, and what a difference you can make in someone’s life, it will be much easier to get the people involved.”

Abby was a reporter about 20 years ago when one of her first community projects was a bone marrow drive for a former reporter for the station. The involvement of the community encouraged her to register herself as a donor. 17 years later, she received a call stating that she was a match for a bone marrow transplant. She didn’t hesitate because she understood that a pint of her bone marrow would be the difference between life and death for her recipient.

“You would want someone to be your hero if Shaunise was your mother, sister, family member, or your friend,” Abby rationalizes. “Just to be on the registry, be found, and be willing to step up makes a HUGE difference. We actually want to have a pool of committed donors. We have such a great need in our community as African-Americans (because of our tissue typing and the diversity in our tissue typing) that we need more people and more diversity in the registry to meet all of the needs.”

The number of people who have joined the registry has grown drastically since Abby has joined the cause. With a process as simple as a mail-in kit, those numbers are starting to shoot up even further. A potential donor would go online www.BeTheMatch.com and fill out the initial paperwork. THe foundation will send you a kit in the mail. You take a swab of your mouth, fill out a few more forms, and send it back. At that point, you’re in the registry and they only reach out to you when they have a match to see if you’re a qualified donor. The registry is a major player on many college campuses across the nation. Specifically, one that is tucked away in a Philadelphia, Pennsylvania suburb.

When arriving at Villanova University, the almost 3-decade long football coach, Andy Talley, tells all freshman players that he is very involved with the Be the Match foundation, bone marrow awareness, and bone marrow drives. Essentially, all freshman football players are encouraged to do the cheek swab, the bone marrow drives, as well as go out and recruit other student athletes, sorority and fraternity members, as well as the general student body to do the cheek swab as a way of spreading the awareness.

“I did the drive in 2013as a freshman,  and 2 years later (fall 2015) I got the call saying that I and three others were potentially a match for a person,” CJ, a Villanova football player explains his experience. The hospital wanted me to go in and draw extra blood so they could run a few more tests. It was kind of weird (when I got the phone call) and I was a little skeptical at first. I thought it was one of my teammates playing a prank. It’s very rare for anyone to get a call saying in your match. Being African-American, that chance is even slimmer. I went to Bryn Mawr Hospital to get blood drawn and got a phone call a couple of weeks later saying that I was the match.” 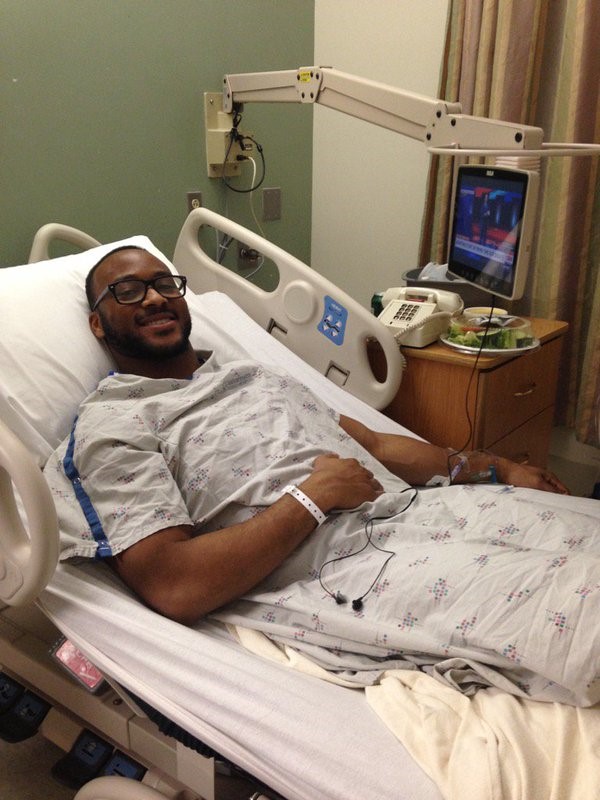 Once you are notified that you are matched with someone and you agree to donate your bone marrow, you have two options of how to move forward. Most people know about the surgical procedure where they take the bone marrow from the hip and you stay in the hospital for a day. But the more negligent area (used about 77% of the time) is a blood stem cell donation which is a nonsurgical outpatient treatment which many do not know is an option. According to Abby, it’s basically the same as donating blood or plasma. CJ opted for the surgery.

“I went in around five o’clock the morning to speak with the surgeon, then it was about a two-hour surgery, and I stayed in bed for the day,” CJ explains. “There’s the option in which you can leave the same day, but I was just soaking it in and didn’t want to move (laughing). Afterward, I felt blessed to be able to give someone a chance at life…to make a difference. I think, ultimately, there is more of a moral obligation. I didn’t choose to be involved with the bone marrow community and Be the Match, it somewhat chose me. In my opinion, if you have the chance to save someone, anyone should absolutely do that. That 33-year-old international woman (his donation recipient) could have been my mom or my sister and if there was someone that was in the position to make a difference, I would hope they would.”

Getting a bone marrow transplant is like putting a new immune system in your body. If you have a sibling, your chances increase by about 25% of being able to be matched to them for a donation. Unfortunately for Shaunise, her brother wasn’t a match. Now that she is a part of the registry, and a part of the bone marrow drive as a whole, she sees the bigger picture. She has been hosting her events and drives as well as working on and attending those of others. In her view, it’s not just about her, It’s about the community as a whole.

“It helps a lot with not just my diagnoses, but leukemia and sickle cell,” Shaunise says. “Sickle cell is very dominant in the African-American community. There are a lot of people that can be helped but just that lack of awareness and lack of information makes it difficult. It’s really as simple as going to the registry. It doesn’t mean that you start having blood marrow drawn the next day. It just places your basic DNA information into the database. At that point, you’re in the registry and they only reach out to you when they have a match to see if you’re a qualified donor.”

Abby reminded me that it’s not someone else’s problem, it’s our problem. When the question was presented to me as “What if it was your mom that needed a transplant and the person that could save her life worked with you, but they had no idea?” the answer was simple, I would have wished that person was aware. And that’s what this registry is all about. You have no idea who’s life you may be able to save. It could be Shaunise, it could be the 33-year-old woman that CJ donated to, or the person that Abby donated to. It could be a child with Leukemia or a mother struggling to handle her sickle cell symptoms. Coach Talley left his players with a quote that I absolutely love. “It’s nice to feel important, but it’s more important to be nice.”