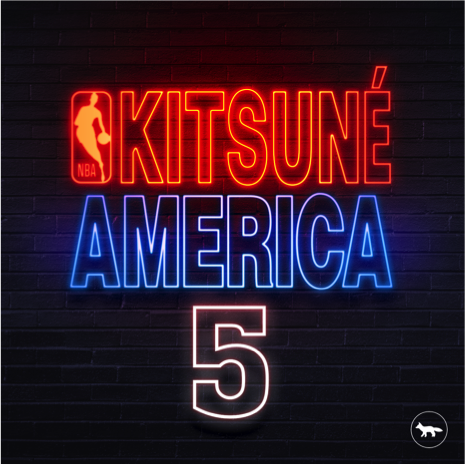 French fashion brand and music label, KITSUNÉ has announced today that, in a first of its kind, has teamed up with the National Basketball Association (NBA) to unveil an NBA inspired ready-to-wear capsule collection and music compilation featuring, exclusively, artists from North America. Both the collection and compilation will be released on February 17th, 2018 – fans can purchase the collection at all Maison Kitsuné stores, online and at authorized retailers. The compilation will be released digitally on the same date via all streaming platforms and via a limited-edition vinyl which can be pre-ordered here: https://kitsune.lnk.to/america5-vinyls

The Kitsuné America compilation series documents the current explosion of exciting North American artists and producers with a soundtrack that features both rising and established artist all with a KITSUNÉ twist. The NBA Edition is the fifth in the series and includes artist from across the continent of varying genres from hip-hop to electro, pop, and dance including music from Cleveland Cavaliers player and rapper Iman Shumpert, HMU, Shay Lia feat. Kaytranada, and more! The full tracklisting of the project can be found below. To kick off the exciting campaign, KITSUNÉ has released the first single off the project which features Milwaukee, WI rapper IshDARR, with his track “Glass” – LISTEN HERE.

To celebrate the launch of this one of a kind collaboration, KITSUNÉ will also bring the vibes with an eight-city tour all timed to local basketball games across the country offering a unique experience aligning fashion, music, and sports. Each date will tip-off with an in-store cocktail party hosted by a selected retailer, followed by a KITSUNÉ Club Night featuring live music and fun. See below for the tour poster. 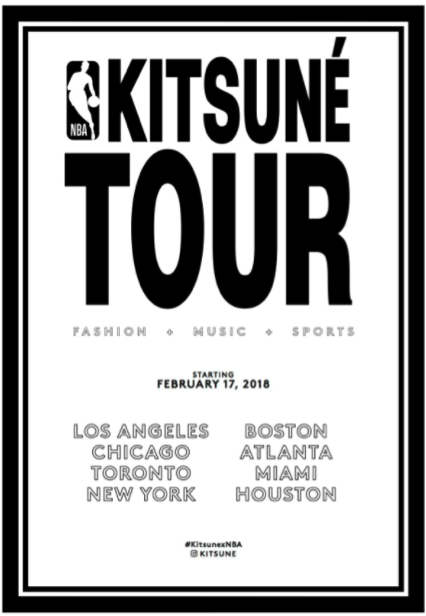 Since its inception, the multifaceted KITSUNÉ – created by music producer Gildas Loaëc and architect Masaya Kuroki – has become a proponent of pushing culture forward across borders through its music releases, fashion collaborations and hundreds of parties and music nights per year, across the world. This venture with the NBA celebrates the founders’ deep-rooted love for the game of basketball and continues the brand’s influence in American by bringing together the worlds of fashion, music, and sports together for an experience like no other.