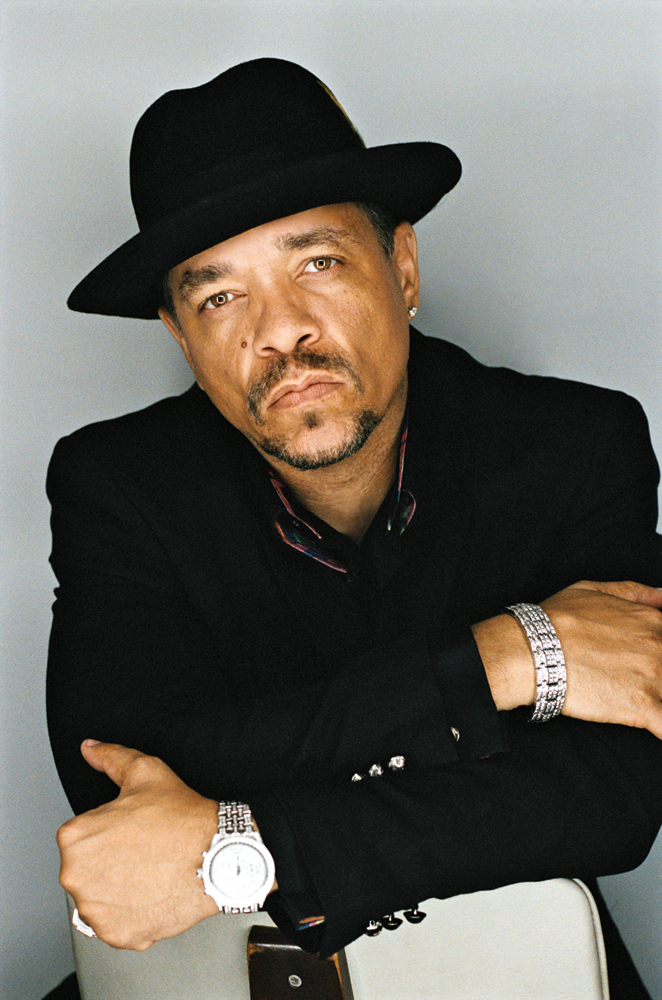 When you grab a mental picture of rapper turned actor Ice-T, the last image you probably get is a fashion trendy icon, blazing red carpets and making public appearances in the latest eye-catching faddisms. Over the years, Ice-T has intentionally—or maybe even unintentionally—crafted his own personal style to correlate with the hard-core image he’s been associated with since the late 80’s and early 90s. But while many of his gangster rapping comrades have transcended their styles throughout the years, Ice-T has always maintained a little less-than- flashy persona.

Think what you will, but Ice-T’s seemingly simplistic fashion sense doesn’t stop him from over-indulging in what he likes. In fact, it’s not unusual to catch him sitting front row during Fashion Weeks for major designer shows, front row, shaded, and donned in his favorite color: black. So the question is, what does Mr. Tracy Morrow, better known to the world as Ice-T, like when it comes to fashion? He spoke to me about his discerning taste in clothes and designers while we sat together at a recent New York fashion show, where the only thing I was actually surprised by seeing was the absence of his shades.

SUAVV: What is your favorite thing about fashion week?

Ice-T: It’s entertaining. I live in New York and I’ve been here for about 11 years and going to the clubs have become boring. It’s something to do, it’s good, and it gets a lot of people together. I just like the excitement and the energy of it. With New York, even though there is always action, you want to find something new to do. I look forward to Fashion Week. It’s fun.

SUAVV: Are there any fashion pieces that you obsess over? Hats, shoes, jackets, ya know? What’s that one piece that you have to have? I’ve noticed that you wear a lot of black clothing.

Ice-T: I wear Black and white a lot. For me, all of my fashion is based on a black pair of jeans, a white pair of jeans, and a snow white pair of sneakers. If I have those three pieces, I can bring any shirt together, any polo shirt or whatever. I like to keep my look clean, tight, and precise. A nice watch, not a lot of jewelry. I keep it really clean and classic. Then I have the other side of me which is the pimp side where I’ll throw on a yellow or pink suits and gators.

SUAVV: How often is that?

Ice-T: I try to dress appropriately. If I know everybody is going to be flamboyant, I&#39;m going to out-do them. But if I’m doing a Law and Order event, I might put on a pin-stripped tailored suit. Day-in and day-out, you’ll find me in some black or white jeans. Plus I live in Miami as well so I wear a lot of white and polo shirts. You have to step it up a bit. I told my son that he’s not old enough to wear white jeans yet (laughing) you gotta know how to put it down. You gotta stay real crisp. You can’t be sagging them and all that bullshit.

Ice-T: Honestly, I used to be an early Versace wearer until everybody got into it? I’m more of a Hugo Boss kind of dude at this point. I like the way the suits fit, it’s cut different than lines like Armani. I like nice clean straight lines. I go into Hugo Boss and I buy out their collection. They have the new polo shirts with a new look that they come out with during the World Cup. I bought all of that stuff. Being a man, if I like something, and I like how it fits, I just get it in every color. I buy all of the shirts down the line. I’m 6’ 210 pounds. So a lot of stuff is cut a little too tight for. So you have to find the jeans or pants that are cut the right way. I don’t sag my jeans but I don’t like for them to be too tight.