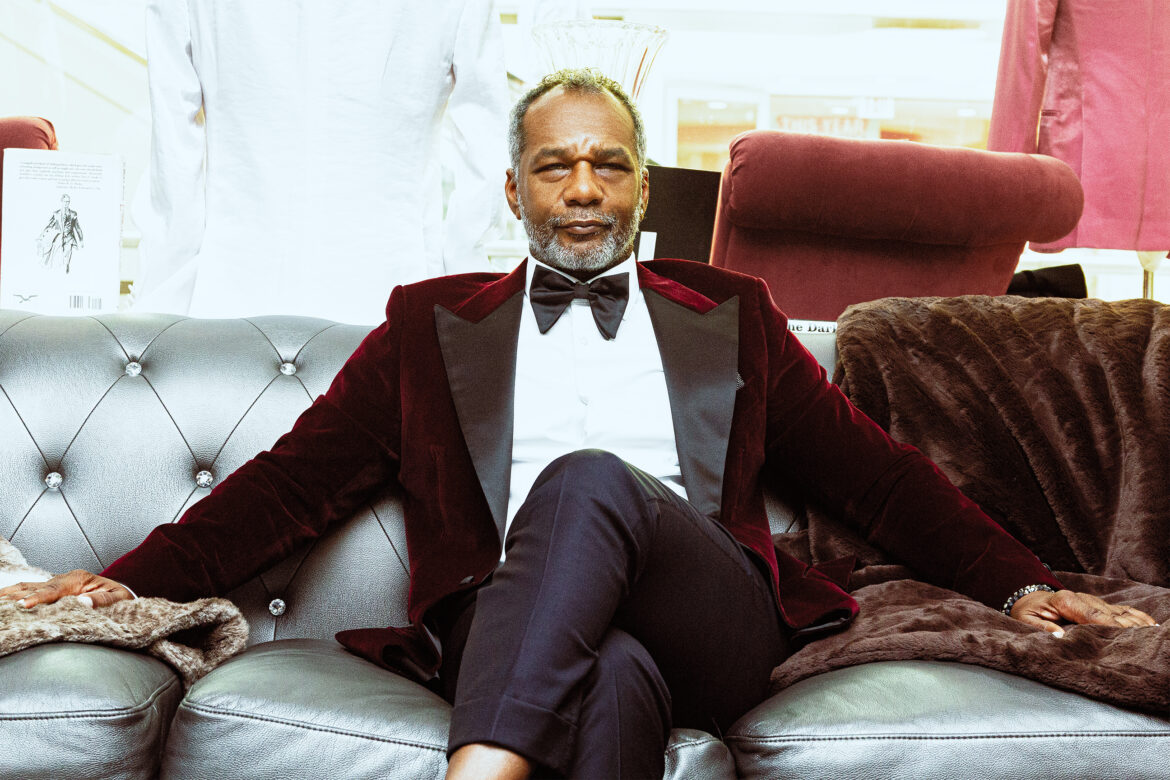 My grandmother used to say “OOOOOOO that you’re looking casket sharp.” Now, (laughing) it was a compliment that you wanted and at the same time didn’t. There’s an unspoken feeling when a man puts on a suit. Everything about us changes with a suit on. We walk differently, we look at folks differently. We know, at that moment, we are the shit. I mean, let’s just call a thing a thing. One man who knows the impact of what a suit will do for a man is Miguel Wilson. Miguel owns the upscale Miguel Wilson Collection located inside of Phipps Plaza in the Buckhead section of Atlanta, Georgia. Surrounded by Louis Vuitton, Gucci, Prada, and Michael Kors shops to name a few, Miguel’s shop in the high-end mall is not a mistake.

Miguel’s father and grandfather are meticulous dressers and were the initial inspiration and guiding forces of his impeccable style. He grew into his fashion sense in high school and knew he had a knack for putting together a flawless outfit. However, it would be that first custom-made suit with his name on the inside that would set him off. He was 26-years-old, working a corporate job, and wearing all of the major labels to work. It was when a friend of his presented an opportunity that would take Miguel from employee to business owner. With stores now open in DC, Atlanta, Miami, New York, and Kansas City, Miguel is well on his way to being a national brand.

SUAVV: When did fashion start for you? How did you become interested in it? How did that happen?

Miguel: I worked a corporate job at the time, Pillsbury food company in corporate sales. I sold biscuits. People don’t know that I worked for Pillsbury selling biscuits and green giant vegetables. But I love suits and I like the dress, but I had a couple of suits made man. And my name was on the inside. It was just such an experience, man. But what happened is the guy who made my suits was a good friend of mine. He was working for a company and decided to start his own business, asked me to be a partner because he knew how much I love clothes too. So he and I started a custom clothing company together and making suits. And during that time that we specialized a lot in the religious sector, we did a lot of pastors in the nineties such as TD Jakes, I was doing Jamal Bryant’s suits when he was in college at Morehouse, and a lot of top pastors around the country. We made a name for ourselves being one of the first ones focusing on the pastoral markets. So that was kind of how I got started.

SUAVV: Okay. And then when, when that takes off and you’ve now built this name for yourself at what point do you, I guess, separate the business or did you separate, are you two still kind of partners at this point?

Miguel: Oh no, no, no. Our partnership didn’t last too long, as most don’t. But, it served its purpose. I got my foot in the door, learned a lot, and I sold my share of the company to him. I went back to school and got my MBA. Once I graduated, I kept thinking about what I wanted to do. I knew I wanted to do something entrepreneurially and I really enjoyed what I was doing within fashion. However, at the time, I had a non-compete clause from when I sold him my shares of the company. So, I had to pay him, I think it was like $15,000 so that I could get back into the industry on my own. And that was a great investment because I was able to get back into doing what I loved, I did it on the side for several years. I worked my corporate job. I started with Pillsbury then I went to work for Marriott for a few years and before I just branched out and decided, I’m going to do this full-time. The funny thing is, I never thought fashion was my landing place. I never saw this as my long-term thing. I’ve always been an entrepreneur, a business-oriented and business-minded person. So this what I was doing at the moment. I’m easily distracted, so, I tried a lot of other things in addition to fashion, but fashion is the only thing that stuck, that stayed, and I was able to maintain and grow from. There’s a lot to be said about that because you have to go through a learning curve in a business so that you can apply what you learn to become successful. So my decision to focus on the one business was one of my best decisions ever. So I had to not allow myself to be distracted by other things and other opportunities and situations and just say, “stick to this, stick to this, stick to this, and not be swayed by potential money and potential success from other things. I just stayed the course.

Miguel: Well, I’m gonna take you back. I remember when I quit my job and I decided I’m going to go full time in fashion, keep in mind, I had a “good job” for seven years. So I never had the financial pressure to be successful in the fashion industry. I made money, but you know, it’s different sell when you’re selling something with no pressure than when you selling it with the pressure of eating, paying rent or mortgage, whatever, you know what I’m saying? When I quit my job, this became not just my passion or my hobby per se, it’s now my livelihood. And honestly, the passion kind of went away a little bit at that time because there was so much pressure. You’re not enjoying things, you get a little desperate and you start having to wheel and deal more and do stuff. Whereas before it was like, I don’t care if you buy something or not, I’m eating either way (laughing). It’s different when you have to start negotiating and hustling because that’s your only source of income. I had to go through a period of really trying to figure that out, man. Learning what hustling was. Because you think you’re a hustler until you have to hustle. Honestly, at the time I played a lot of golf and I was able to supplement my income on the golf course a little bit (laughing). But the thing was, I knew that it wasn’t sustainable. I needed to figure out whether I’m going to go back and get a job or figure out how I’m gonna make this thing work. I had to instill certain discipline in myself to do that. And I remember, one of the things I did was make a goal that had to meet 20 new people a day. That’s 100 people a week. From that 100, I have to able to sell to five of them. That was my business model…that was the hustle platform I created for myself to eat. Like, you know, It takes the pressure off when you understand it’s a numbers game and I just got to put myself in the right places to meet the right people. Let me go ahead and create a process of meeting people, create a process of developing relationships, and that’s why I know half of Atlanta right now. I remember my first little showroom over on Piedmont Road. It was 300 square feet. And a lot of the guys who have known me for a long time knew me from back then. You have to create a certain level of discipline within yourself. And discipline is simple. It’s just creating a good habit that you repeat every day.