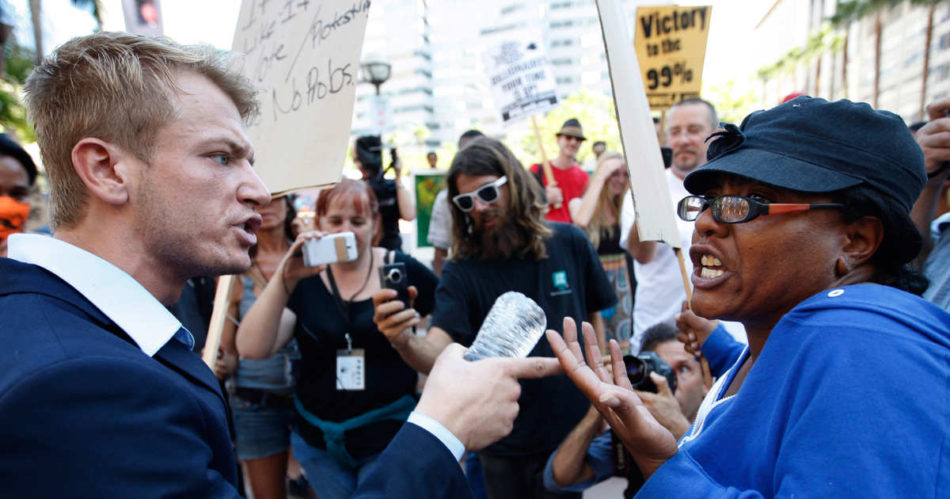 An ongoing enormity has been 40% of voters’ continued support for the injuries inflicted on America in the past eighteen months (cf. “Experts explain why Trump loyalists refuse to accept that their idol is compromised,” Michael Rozca, Salon, 7-20-2018).  These voters mix in public. They have relatives and acquaintances with commonsense values and bump repeatedly against reality-based information. Knowing they reinforce their own thinking, for example, through confirmation, disconfirmation, and desirability biases seems to help us little in reaching them. We point out their error and they ignore us.

Forty years as a clinical psychologist have at least alerted me that there are better and worse ways to handle disagreements.  Some ways, like telling others they are stupid, guarantee conflict.  Neighbors and friends surrounding them for a corrective chorus also have poor outcomes.  But if hiking along a river we discover a man sinking into quicksand, we do not ask why he is there and how he got caught. And about politics, it has not helped to ask, “Why are they in quicksand?” If we are part of the story, we have a personal response: “How can I get you out?” We step toward the problem and figure out what we can do.  A few common principles can help.

The most powerful, universally available, but untapped force for change is one-to-one conversation, personal contact.  Certain factors increase its impact.  We are more likely to generate change when we reach out, have a strategy, exhibit respect, find strengths even in their flaws, match their characteristics, listen carefully, draw them out, and have something to say.

1. We can pick someone who reappears in our life like a relative, co-worker, or acquaintance, and open contact with them if we choose to.  One study found that people underestimate by about 50% their ability to persuade someone just by asking for what they want. Many Americans have given up approaching others after hitting a wall many times, but change follows only after we break out of our self-imposed envelope and reach out, open a conversation, make a comment, and offer an idea.

2. Before talking, we need to know what will make a difference. The beginning of a strategy for Samurais was, “First defeat your enemy in your own mind.”  If we cannot at least do that, we will probably fail. Without a strategy, we are more likely to repeat fruitless, random responses, but our objective differs from the Samurai’s. They meant to kill an adversary while we want harmony with them so we can work on ideas together.

Harmony implies a subtle internal state, however, and if we start without it, where do we go?  Someone who is closed and defensive must catch it from us, which means we first must generate harmony in our own mind. Whatever our inner state, we transmit it in seconds through the genuineness or tightness of our smile, the energy in our hello, how our voice drops off or rises, how our eyes meet, and so on.  Our cues tell them if they are welcome with us, a quality of the exchange entirely under our control.  We can choose to be a comfortable harbor for them, can adopt a viewpoint offering them ease and safety.

3. We steer our inner state toward harmony first by focusing on something about them we can respect.  A man I knew in the construction business had a problem with a builder he often had to encounter. There were ten things he did not like about the man, he told me, but he altered their relationship with one thought. He genuinely respected that the man knew how to make money. As he sustained that sincere attitude over time, tension between the two steadily diminished, and they eventually became friends.  Holding such a focus modifies the tone and energy we project, quietly affecting the other.

When the person we face has wrong and even nasty ideas, we may find ourselves offended and approach them instinctively as an adversary. Wishing to shift to respect instead, it may not be clear to us what deserves it. To resolve this, we can scour up what we know about them. Is there a value in any part of their life we can appreciate? Are they a hard-worker?  Involved parent? Reliable friend?  Maybe they suffered abuse, loss, poor education, health challenges, or personal rejection that elicit our empathy: “You’ve really been through a wringer. I can respect that.” Maybe they rail against conspiracies: “You hate the idea of others manipulating society, don’t you? I can respect that.”  As we remember our respect for them, we open a door in ourselves only we control.

4. A more telling way to express respect is somewhat counter-intuitive: Right within the behavior that annoys us, we can search out the strength used and respect it. If for example they passionately vent a wacky idea, a quality of it is they let us know how they feel, which is an important human activity with many constructive uses though it can be misdirected.  We focus on the quality instead of its misuse.

“George,” we might say, “you’re able to express these things that you feel. I can tell that they matter a lot to you. Some people who have ideas will not let them out so they are harder to talk to, but you say what you feel. I know that these ideas are important enough to you that you want to pass them on, and I can respect that.”  Every word we say about them and ourselves is undeniably true.

But what if they exhibit the opposite trait? Instead of letting out the ideas, they hold them inside and are guarded about others knowing what they believe, so we respect what is there: “I know you must feel deeply about these things, but you understand others have different ideas, and you don’t feel called on to correct them. I can respect that.”  Again we describe the positive quality in common terms and express it sincerely with our tone of voice and demeanor. The respectable element may be in their “way with words,” emotional presence, boldness, analytic ability, imagination, attention to details, or, for many people who have stuck by the president, loyalty. We distinguish the quality from its temporary misapplication and offer our respect for it.

5. Around other people we all steadily monitor, “Am I safe with this person?”  If either of us answers “No,” we have little chance of constructive exchange.  While the respect we express for the other conveys safety to them, their intuition goes further to notice similarities and differences. We compute differences between us as less safe, and similarities as more safe. Some are visible qualities placing us in classes, tribes, and identity groups. Cues of ethnicity, apparel, possessions, and badges of religious affiliation may determine if we will even allow personal contact.  Common values, mutual support for a policy, or shared loyalty to a public figure can link us.

The cues we express directly in the moment go even further. Our intuition seeks out what in the other matches ourselves, like the qualities of our speech. If we talk in a foreign language or identity-group lingo, the other hears, “Hey, you and I are really different.” We pick up subtle cues like another’s tone, pitch, accent, and speed of speech; body position and tilt, eye level, gestures, vocabulary, and even each other’s rate of breathing.  Our absorbent awareness tallies up all the micro-features it can to determine our safety and comfort together (to understand this principle better, Google “Building rapport” for several good articles).

Let us say, for instance, that I am canvassing in a middle class neighborhood and could meet all kinds of people.  I have a ring in my nose, a question mark tattooed on my forehead, jeans with holes in the knees, and my cap is turned backwards. The question is, for whoever opens the door, will their first glance at me tell them we are the same or different?  We can understand the problem in interviewing for a job where a friend works. We ask them, “What is the dress code there?  What do they look for?”  We want to know how to fit in and do it by adopting similar cues.

Understanding this gives us an edge. As the more versatile in an exchange, we can deliberately adopt the other’s conditions: Stand like they stand, lean like they lean, fold our arms and legs like they do, tilt our head, nod, use their phrases, match (though moderating) their voice pitch and pace, use their vocabulary, and so on. We remove differences.  Noticing tit-for-tat retorts back and forth in an argument, we need to slap ourselves upside the head, stop at once, and return to our strategy—feeling respect and matching cues.  A clue to people’s instinct for rapport is watching a couple in a restaurant who are in love; how they instinctively match each other’s body position and synchronize their movements and words.  With multiple signals they tell each other “I am here for you.”  A study of master psychologists years ago found that they commonly established rapport with a client within minutes by matching them.